The League One match at LNER Stadium on Saturday sees home team Lincoln City do battle with Burton Albion.

Lincoln City enter this game coming off the back of a 0-0 League One drawn match against MK Dons.

Analysis of their past results shows that Lincoln City:

Following on from tasting defeat last time out to Shrewsbury Town in League One competition, Burton Albion and their travelling supporters will be hoping that they can get a better result in this one.

Looking at their form, and Burton Albion have been scored against in 5 of their last 6 games, with opponents netting 13 goals in total. In defence, Burton Albion could really do with shoring things up.

A review of their most recent head-to-head clashes going back to 07/03/2020 shows that Lincoln City have won 4 of these and Burton Albion 2, with the number of drawn games being 0.

A sum of 21 goals were produced between them in this period, with 12 of them from The Red Imps and 9 belonging to The Brewers. This gives an average number of goals per game equal to 3.5.

The previous league fixture featuring these sides was League One match day 23 on 26/12/2022 which finished with the scoreline of Burton Albion 3-0 Lincoln City.

There is just one fitness concern for the Lincoln City gaffer Mark Kennedy to contend with from an otherwise fully-primed group. Lewis Montsma (Cruciate Ligament Rupture) is out of contention.

Burton Albion boss Dino Maamria has not got a full squad to pick from. William Kokolo (Unknown Injury) and Louis Moult (Ankle Injury) will not be playing here.

Here is a game where Burton Albion might need a bit of good fortune to break down this Lincoln City lineup who we think will gain the upper hand.

We therefore think that it’s going to be a good tussle with a 1-0 advantage for Lincoln City when the full-time whistle blows. 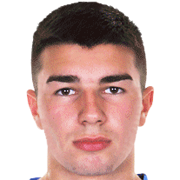 Mostly taking up the Central Attacking Midfielder position, Danny Mândroiu was born in Dublin, Rep. Ireland. After having played his first senior match for Bohemian FC in the 2019 season, the skilful Midfielder has managed 3 league goals in the League One 2022 - 2023 campaign to date coming from a total of 11 appearances.

While we have made these predictions for Lincoln City v Burton Albion for this match preview with the best of intentions, no profits are guaranteed. Always gamble responsibly, and with what you can afford to lose.