Our tips, poll and stats for Osasuna v Getafe can all be found here including the latest game odds.

Osasuna will play in this game following a 0-0 La Liga tied result vs SD Huesca.

Fewer than three goals per game were seen in 6 of the last 6 meetings where Osasuna have been involved. Regarding the goal distribution from this period, opposition teams scored a total of 4 and Los Rojillos managed the sum of 2.

Leading up to this clash, Osasuna:

During their 6 most recent matches, José Bordalás's Getafe have managed to stick the ball in the net a total of 5 times therefore earning them the goals scored per game average of 0.83.

Their past results show that Getafe:

If we look at their past head to head duels dating back to 11/05/2013, there has been little between the sides with Osasuna winning 2 of those games, Getafe 2 and 2 being drawn after 90 minutes of play.

A sum of 7 goals were yielded between them during those clashes, with 4 of them from Los Rojillos and 3 netted by Azulones. This gives an average number of goals per game equal to 1.17.

On that day, Getafe managed 55% possession and 7 shots on goal with 1 of them on target. Their only player to score was Jaime Mata (54').

On the other side, Osasuna had 10 attempts at goal with 3 on target.

Getafe manager José Bordalás has to choose from a squad that has some fitness concerns. Erick Cabaco (Knee Injury) and Cucho (Metatarsal Fracture) will miss out on this game. Allan Nyom will not be able to play in this game through being suspended.

We’re of the view that Getafe might have a difficult job to score against this Osasuna side who we think might well score one, at least.

With that in mind, we reckon that it will be a 1-0 advantage for Osasuna after 90 minutes. 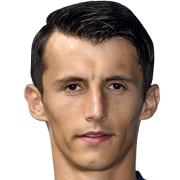 Mostly used in the Striker position, Ante Budimir was born in Zenica, Bosnia and Herzegovina. Having made a first senior appearance for Inter Zaprešic in the 2010 - 2011 season, the skilful Forward has accumulated 6 league goals in this LaLiga 2020 - 2021 campaign so far in a total of 20 appearances.

While we have made these predictions for Osasuna v Getafe for this match preview with the best of intentions, no profits are guaranteed. Always gamble responsibly, and with what you can afford to lose. Best of luck.