View all Girona FC v Cádiz tips, stats and our pre-match poll below - along with the latest match odds.

Girona FC will play in this match after a 1-1 La Liga 2 tied result against Ponferradina.

In that match, Girona FC managed 50% possession and 18 shots at goal with 7 of them on target. The only player on the scoresheet for Girona FC was Monchu (40'). For their opponents, Ponferradina got 10 attempts on goal with 4 on target. José Amo (71') was the scorer for Ponferradina.

Their latest results highlight the fact that much solidity has been shown by the Girona FC rearguard. Blanquivermells have been mean at the back, resulting in the total number of goals that have flown into the back of their net over the course of their last six outings standing at 4.

Cádiz head into the meeting following a 3-1 La Liga win over Alaves in their most recent fixture.

In that game, Cádiz managed 39% possession and 10 attempts on goal with 7 on target. For Cádiz, the scorers were Alex Fernández (15'), Antony Lozano (56') and Álvaro Negredo (68'). For their opponents, Alaves got 5 attempts at goal with 2 of them on target. Joselu (23') was the scorer for Alaves.

It has become apparent that Cádiz have made hard work of scoring goals over their previous six games, contributing the disappointing return of just 4. In those matches, Submarino amarillo have also seen the overall goal aggregate against them equal 5. Having said that, we must now wait to see if such a trend might be sustained in this upcoming game.

Looking at their most recent head-to-head clashes going back to 21/11/2009 shows us that Girona FC have won 2 of these games and Cádiz 3, with the tally of draws standing at 1.

A sum of 14 goals were scored between the two sides during those clashes, with 7 from Blanquivermells and 7 belonging to Submarino amarillo. This gives an average number of goals per game equal to 2.33.

On that occasion, Girona FC managed 52% possession and 5 attempts on goal with 2 of them on target. Their only player to score was Cristhian Stuani (22', 59').

On the other side, Cádiz had 7 shots at goal with 3 of them on target. Alex Fernández (84') was the scorer.

Regarding absentees, there’s just a single fitness concern for the Girona FC manager Francisco Rodríguez to be concerned with from an otherwise fully-primed group. Cristhian Stuani (Tear in the abductor muscle) will miss out.

Owing to a completely healthy group to choose from, Cádiz boss Álvaro Cervera does not have any fitness worries to speak of coming into this match.

Looking at these two, we feel that Cádiz and Girona FC should both be able to find the back of the net here although it’s difficult to select a clear winner.

A close call, and we think a draw is quite likely. We’re therefore anticipating a very even match with a 1-1 scoreline at full-time. 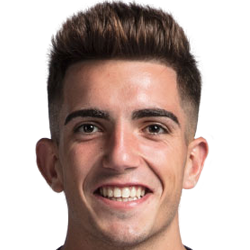 Generally playing in the Centre Midfield position, Monchu was born in Palma de Mallorca, Spain. After making a first senior appearance for in the 2017 - 2018 season, the talented Midfielder has managed 2 league goals in this LaLiga2 2020 - 2021 season to date coming from a total of 20 appearances.

While we have made these predictions for Girona FC v Cádiz for this match preview with the best of intentions, no profits are guaranteed. Always gamble responsibly, and with what you can afford to lose. Good luck if you do place a bet today.