Hull City are the guests at Cardiff City Stadium on Wednesday for the Championship fixture with home team Cardiff City.

View all Cardiff City v Hull City tips, stats and our pre-match poll below - plus the latest betting odds.

Cardiff City fans will want a repeat of their previous result, being the 1-2 Championship success against Preston North End.

Coming into this clash, Cardiff City have not lost a league tie with Hull City in their last 4 matches.

Hull City will go into the game following a 2-0 Championship win to beat Birmingham City in their last outing.

Over the course of 5 of the prior 6 clashes involving Hull City, a notably low volume of goals have been scored between them and opposing teams. The overall average number of goals per game within that spell comes to a mere 1.67, with the average goals for The Tigers standing at 0.83. Having said that, we will just have to wait and see whether such a trend will be replicated in this next match or not.

Coming into this fixture, Hull City haven't beaten Cardiff City when they've played them away from home in the last 2 league matches.

A glance at their prior head-to-head clashes dating back to 15/09/2015 shows that Cardiff City have won 3 of them & Hull City 2, with the number of drawn matches standing at 1.

In all, 14 goals were yielded between them during those clashes, with 8 for The Bluebirds and 6 created by The Tigers. The average number of goals per game works out to 2.33.

The previous league fixture featuring the two was Championship match day 46 on 22/07/2020 which finished with the scoreline of Cardiff City 3-0 Hull City.

On the other side, Hull City had 8 attempts on goal with 2 of them on target.

The Cardiff City manager Steve Morison doesn’t have any fitness concerns at all coming into this clash owing to a fully injury-free group to choose from.

Thanks to a completely injury-free group available to choose from, the Hull City boss Grant McCann does not have any fitness concerns to report before this clash.

We’re envisaging that Hull City will need to put in a solid display to register a score against this Cardiff City lineup who we think will likely emerge victorious.

We’re therefore anticipating a hard-fought 1-0 victory for Cardiff City at the end of the match. 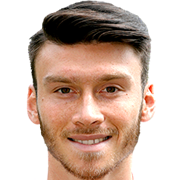 Normally taking to the field in the Striker position, Kieffer Moore was born in Torquay, England. After making a first senior appearance for Yeovil Town in the 2013 - 2014 season, the goalscoring Forward has scored 4 league goals in this Championship 2021 - 2022 season so far in 17 appearances.

While we have made these predictions for Cardiff City v Hull City for this match preview with the best of intentions, no profits are guaranteed. Always gamble responsibly, and with what you can afford to lose. Good luck with your selections.