Return to this page a few days before the scheduled game when this expired prediction will be updated with our full preview and tips for the next match between these teams.
Full-Time Result Prediction
👉
Celta Vigo to Win

Celta Vigo face off with guests Elche CF at Estadio Abanca-Balaídos in the La Liga meeting on Saturday.

Scroll down for all of our predictions, poll and stats for the Celta Vigo v Elche CF game - as well as the best betting odds.

Celta Vigo will be wanting a better result here after a 3-1 La Liga loss in their previous game against Barcelona.

In that game, Celta Vigo managed 46% possession and 13 shots on goal with 5 on target. The only player to score for Celta Vigo was Iago Aspas (50'). At the other end, FC Barcelona had 10 shots at goal with 4 of them on target. Memphis Depay (30') and Pierre-Emerick Aubameyang (41', 48') scored for Barcelona.

Eduardo Coudet's Celta Vigo have scored 8 times in their past 6 outings. The corresponding tally of goals that they have conceded in that same time amounts to 7.

Following on from being beaten in their last game against Atlético Madrid in La Liga competition, Elche CF and their fans will hope to get a better result this time.

In that match, Elche CF managed 56% possession and 9 attempts at goal with 0 on target. At the other end, Atlético de Madrid got 11 shots on goal with 6 on target. Matheus Cunha (28') and Rodrigo De Paul (62') scored for Atlético Madrid.

In the course of their 6 most recent matches, Francisco Rodríguez's Elche CF have had reason to celebrate scoring a total of 6 times thus yielding them the goals scored per game average of 1.

Coming into this fixture, Elche CF have not won against Celta Vigo when having played them away from home in the previous 2 matches in the league.

If we look at their past head to head duels going back to 01/03/2014, both clubs have shared the honours with Celta Vigo winning 2 of those games, Elche CF 2 and 2 being draws after 90 minutes of play.

In all, 11 goals were scored between the two sides during those clashes, with 6 from Os Celestes and 5 created by Los Franjiverdes. The average goals per game has been 1.83.

The previous league meeting between these clubs was La Liga match day 8 on 03/10/2021 when it ended Elche CF 1-0 Celta Vigo.

That day, Elche CF managed 45% possession and 12 attempts on goal with 5 on target. The scorer was Darío Benedetto (49').

At the other end, Celta Vigo had 10 shots on goal with 1 on target.

The Celta Vigo manager Eduardo Coudet will be grateful to have no fitness worries whatsoever coming into this game thanks to a fully injury-free squad available for selection.

Due to a completely injury-free squad to pick from, the Elche CF manager Francisco Rodríguez has no fitness concerns to report coming into this match.

In this match, Elche CF will likely create enough chances to find the net against this Celta Vigo side, however that isn’t expected to be enough to prevent defeat.

We’re tipping a 2-1 advantage for Celta Vigo when the full-time whistle blows. Should be an interesting one. 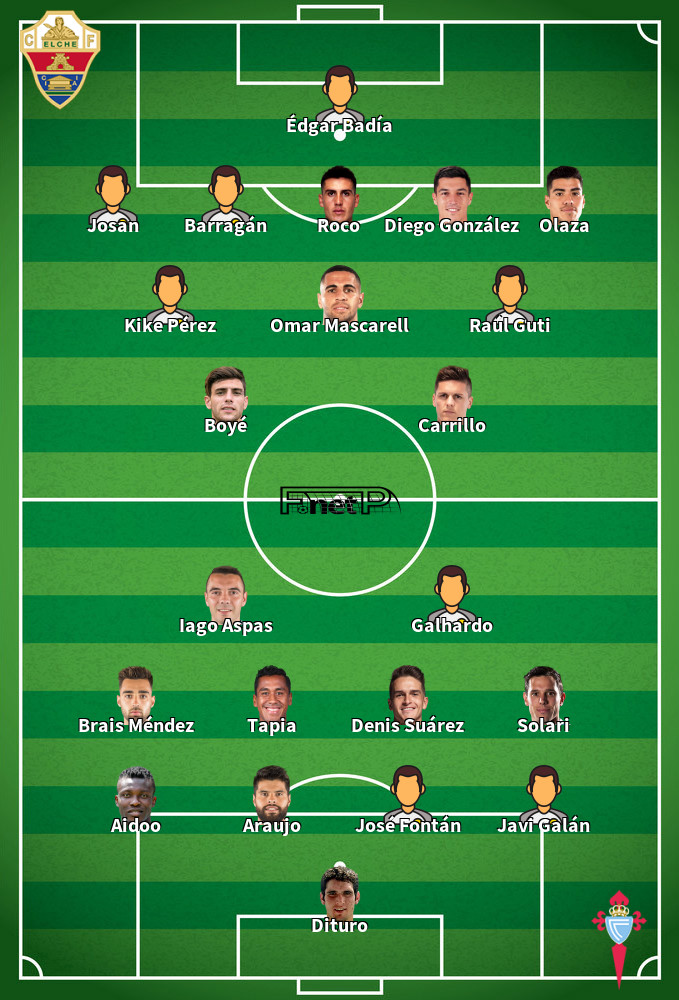