View all of the Sparta Prague v Celtic predictions, poll and stats below - as well as up-to-date odds.

Sparta Prague will be hoping for a better result after the 2-4 First League loss in their previous game against Dynamo České Budějovice.

It’s been all too rare in recent times that Sparta Prague have managed to hold out for a full 90 minutes. The facts show that Železná Sparta have been scored against in 6 of their previous 6 clashes, shipping 16 goals along the way. Such a trend won’t necessarily follow through into this game, of course.

Last time out, Celtic drew 2-2 in the Premiership tie with Hibernian.

In a total of 5 of the previous 6 games involving Celtic, a minimum of three goals have been hit. The average goals scored per match in that spell is 4.33, with the number of goals averaged by Celtic working out to 2.33.

The previous league encounter between these clubs was Europa League match day 3 on 05/11/2020 when the final score was Celtic 1-4 Sparta Prague.

That time, Celtic had 58% possession and 10 shots at goal with 4 of them on target. Their only player to score was Leigh Griffiths (65').

The match was refereed by István Kovács.

Due to a mostly healthy group of players, there is just the one fitness problem for the Celtic boss Neil Lennon to be concerned about. David Turnbull (Corona virus) won’t be playing here.

In our view, Celtic have enough to find the back of the net against this Sparta Prague lineup, however it isn’t expected to be as many as the goals that they could concede.

We think that it’s going to be a 2-1 advantage for Sparta Prague after 90 minutes. Let’s see what happens here. 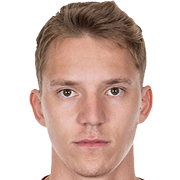 Regularly used in the Striker position, Lukáš Juliš was born in Chrudim, Czech Republic. After making a first senior appearance for Sparta Prague in the 2013 - 2014 season, the skilful Forward has bagged 6 league goals in the First League 2020 - 2021 campaign so far coming from a total of 7 appearances.

While we have made these predictions for Sparta Prague v Celtic for this match preview with the best of intentions, no profits are guaranteed. Always gamble responsibly, and with what you can afford to lose. Good luck if you do place a bet today.