Our Charleroi v KV Mechelen tips, poll and stats can be seen in full below - plus the latest betting odds.

Charleroi will be hoping to return to winning ways here after the 3-2 First Division A loss in their previous game against Oostende.

In their past 6 games, Karim Belhocine's Charleroi have managed to score 10 times which gives them an average number of goals scored per match equal to 1.67.

Going into this game, the form guide shows that Charleroi:

KV Mechelen will go into this meeting following a 3-0 First Division A win to defeat Antwerp in their most recent fixture.

Demonstrating their partiality to eventful matches, goals have been celebrated 21 times in the last six matches in which KV Mechelen have taken to the field, making it a mean average of 3.5 goals for each meeting. Opposing teams have hit 10 of those goals.

Their prior results show that KV Mechelen:

A glance at their past head to head clashes dating back to 20/12/2016 tells us that Charleroi have won 2 of these and KV Mechelen 1, with the tally of drawn games standing at 3.

A combined total of 18 goals were scored between them during those clashes, with 10 from Les Zèbres and 8 being from Mechelen. The average goals per game has been 3.

The previous league encounter featuring these sides was First Division A match day 12 on 06/11/2020 when the final score was KV Mechelen 3-3 Charleroi.

There aren’t many personnel worries, with just one fitness concern for the Charleroi gaffer Karim Belhocine to contend with thanks to an almost full-strength squad. Ken Nkuba (Cruciate Ligament Rupture) is sidelined. Marco Ilaimaharitra will not be able to play in this game through being suspended.

From a largely available squad, there is just the one fitness worry for the KV Mechelen gaffer Wouter Vrancken to be concerned about. Nikola Storm (Muscle Injury) won’t be playing here.

We think that KV Mechelen might have a difficult job to register a score against this Charleroi team who we think will likely be able to grind out a win.

We’re therefore seeing a 1-0 win for Charleroi at the conclusion of the game. 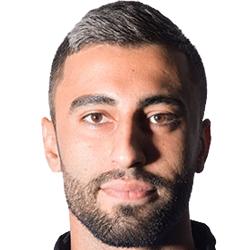 Regularly playing in the Striker position, Kaveh Rezaei was born in Eslamabad-e Gharb, Iran. After having played his first senior match for Charleroi in the 2017 - 2018 season, the gifted Forward has hit 7 league goals in this First Division A 2020 - 2021 season to date in a total of 14 appearances.

While we have made these predictions for Charleroi v KV Mechelen for this match preview with the best of intentions, no profits are guaranteed. Always gamble responsibly, and with what you can afford to lose. Best of luck with your selections.