Our Charleroi v RSC Anderlecht tips, poll and stats can be seen in full below (inc. the best betting odds).

Charleroi, following on from their previous result, will be hoping for more of the same after a 1-2 First Division A triumph over Cercle Brugge.

In that match, Charleroi managed 41% possession and 11 shots on goal with 4 on target. For Charleroi, the goals were scored by Ryota Morioka (3') and Loïc Bessilé (8'). On the other side, Cercle Brugge got 21 shots at goal with 5 of them on target. Jesper Daland (90') scored for Cercle Brugge.

Over their preceding 6 games, Edward Still's Charleroi have managed to score a total of 10 times, an average number of goals scored per match of 1.67.

Going into this contest, Charleroi haven't been defeated in their previous 2 home league matches.

In their previous game, RSC Anderlecht drew 1-1 in the First Division A tie with KV Kortrijk.

Proving their fondness for high-scoring matches, we’ve seen goals 26 times in the prior 6 games in which RSC Anderlecht have played, making it a mean average of 4.33 goals for each clash. Opposition teams have managed 10 of those goals. Such a trend won’t necessarily be carried forward into this next game, of course.

Going into this contest, RSC Anderlecht haven’t won away from home in the past 3 league games.

A look at their most recent head-to-head meetings dating back to 12/08/2018 tells us that Charleroi have won 1 of these and RSC Anderlecht 3, with the tally of draws being 2.

A sum of 12 goals were produced between them during those clashes, with 4 from Les Zèbres and 8 for Paars-wit. That is an average goals per game value of 2.

The last league fixture between these clubs was First Division A match day 25 on 19/01/2021 when it finished RSC Anderlecht 3-0 Charleroi.

The Charleroi manager Edward Still has no fitness concerns to speak of before this clash owing to a completely injury-free squad available to select from.

With a completely healthy group to pick from, the RSC Anderlecht manager Vincent Kompany has no fitness concerns to report coming into this game.

We feel that over the course of the game, Charleroi might need a bit of good fortune to score against this RSC Anderlecht outfit who we think should get the win and a maybe even keep a clean sheet as well.

We therefore fancy a very even match with a 0-1 win for RSC Anderlecht at the end of the 90. 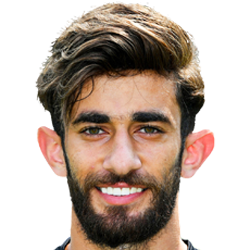 Mostly played in the Right Attacking Midfielder position, Ali Gholizadeh was born in Namin, Iran. Having played his first senior match for Charleroi in the 2018 - 2019 season, the dangerous Midfielder has bagged 5 league goals in this First Division A 2021 - 2022 season to date coming from a total of 14 appearances.

While we have made these predictions for Charleroi v RSC Anderlecht for this match preview with the best of intentions, no profits are guaranteed. Always gamble responsibly, and with what you can afford to lose. Good luck with your selections.