The Serie B fixture at Stadio Marcantonio Bentegodi on Friday will see home team Chievo Verona facing opposition in the form of Pescara.

All Chievo Verona v Pescara game predictions, stats and user poll are shown below - as well as the best betting odds.

Chievo Verona are hoping to win again after their last result, the 0-1 Serie B triumph versus Benevento.

It has not been often in recent times that Chievo Verona have managed to hold out for a full 90 minutes. The facts show that Mussi Volanti have been scored against in 5 of their previous 6 matches, letting in 7 goals in the process.

Going into this contest, Chievo Verona haven't been defeated in their previous 3 league matches at home.

Pescara will come into the game following on from a 1-0 Serie B win with the downing of Livorno in their last game.

The stats tell the story, and Pescara have been scored against in 5 of their last 6 games, with opponents netting 6 goals in total. Defensively, Delfini can certainly do much better. Such a trend isn’t assured to be carried forward into this game, though.

Ahead of this meeting, Pescara have not won away from home in their last 8 matches in the league. A poor run.

The previous league fixture featuring these clubs was Serie B match day 19 on 29/12/2019 and the score finished Pescara 0-0 Chievo Verona.

That time, Pescara managed 48% possession and 16 attempts at goal with 1 on target.

Chievo Verona got 8 shots at goal with 3 of them on target.

The referee was Niccolò Baroni.

Chievo Verona boss Alfredo Aglietti does not have any fitness worries whatsoever ahead of this game with a completely healthy group ready to go.

Thanks to a largely healthy squad, there is just the one fitness issue for the Pescara boss Andrea Sottil to be concerned with. Marco Tumminello (Sideband injury) won’t be in action. Franck Kanouté cannot play in this game through suspension.

Looking at these two teams, we feel that Pescara would be disappointed if they were not to find the back of the net against this Chievo Verona team, but that probably won’t quite be as many as they will have scored against them.

Our tip is for a very close game with a 2-1 winning margin for Chievo Verona when all is said and done. Should be a good one.

Both Teams to Score Prediction for Chievo Verona vs Pescara
Yes 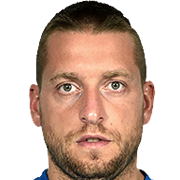 Mostly deployed in the Central Attacking Midfielder position, Emanuele Giaccherini was born in Talla, Italy. Having made a first senior appearance for Cesena in the 2009 - 2010 season, the accomplished Midfielder has netted 5 league goals in the Serie B 2019 - 2020 campaign to date from a total of 23 appearances.

While we have made these predictions for Chievo Verona v Pescara for this match preview with the best of intentions, no profits are guaranteed. Always gamble responsibly, and with what you can afford to lose. Good luck!