The Serie B fixture at Stadio Benito Stirpe on Saturday sees home side Frosinone prepare for the visit of Cittadella.

All Frosinone v Cittadella game predictions, stats and user poll are shown below (plus the best game odds).

Frosinone will be hoping to return to winning ways here after the 1-0 Serie B loss in their previous game against Salernitana.

An interesting aspect of more recent Frosinone games is the high number of scores with a nil in them.

Taking their prior 6 clashes leading up to this one, in as many as 5 of them a wager on BTTS would have lost.

Going into this game, the form guide shows that Frosinone:

In their previous fixture, Cittadella drew 1-1 in the Serie B match with Reggina.

The forward players for Cittadella have suffered from a shortage of goals over their previous six clashes, contributing the poor return of only 4. In those fixtures, Granata have also seen the collective goal aggregate of their opponents equal 4. That kind of pattern isn’t assured to be carried forward into this match, of course.

Coming into this contest, Cittadella have not won away from home in their last 4 league games.

Looking at their past head to head clashes dating back to 06/06/2018 shows us that Frosinone have won 1 of these and Cittadella 2, with the tally of draws being 3.

An aggregate of 12 goals were scored between the two sides during those clashes, with 5 for Canarini and 7 created by Granata. That’s an average goals per game of 2.

The previous league contest between the two was Serie B match day 14 on 22/12/2020 when it ended Cittadella 1-0 Frosinone.

That day, Cittadella had 54% possession and 20 shots at goal with 7 of them on target. Their only player to score was Roberto Ogunseye (45').

Frosinone got 8 shots on goal with 2 of them on target.

The referee was Valerio Marini.

Cittadella boss Roberto Venturato has some current player fitness concerns. Tommaso Cassandro (Unknown Injury) and Enrico Baldini (Muscle Fatigue) are names that won’t be on the team sheet. Davide Adorni is ineligible for this match because of suspension.

Looking at these two teams, we feel that Cittadella may well find it hard to put one past this Frosinone lineup who we think might well score at least once to gain the upper hand.

We’re therefore anticipating a highly competitive game with a 1-0 winning score for Frosinone when the full-time whistle blows. 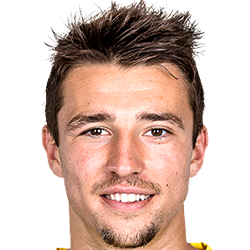 Typically played in the Striker position, Andrija Novakovich was born in Muskego, USA. Having played his first senior match for Reading in the 2014 - 2015 season, the gifted Forward has scored a sum of 7 league goals in the Serie B 2020 - 2021 campaign so far coming from a total of 28 appearances.

While we have made these predictions for Frosinone v Cittadella for this match preview with the best of intentions, no profits are guaranteed. Always gamble responsibly, and with what you can afford to lose. Best of luck.