Como will face off against guests Pisa at Stadio Giuseppe Sinigaglia in the Serie B fixture on Saturday.

All Como v Pisa game predictions, stats and user poll are shown below (plus the best game odds).

Como enter this match following a 1-1 Serie B drawn match vs Pisa.

In that match, Como had 51% possession and 7 shots on goal with 3 on target. The scorer for Como was Patrick Cutrone (10'). At the other end, Pisa got 9 shots at goal with 3 of them on target. Matteo Tramoni (44') scored for Pisa.

A common aspect of more recent Como games is the number of nil scores.

From their previous 6 clashes before this one, in as many as 5 of them a bet on "Both Teams to Score" would have been a loser.

A series of resolute performances from the Pisa defence has resulted in the number of goals they’ve conceded standing at 2 from their last 6 outings in total. In that period, their own forwards have managed to score 7. That trend won’t necessarily be carried forward into this next game, of course.

Coming into this contest, Pisa are unbeaten in their previous 8 league matches away from home. Impressive, to say the least.

On that occasion, Pisa had 59% possession and 13 shots on goal with 5 of them on target. The scorers were Olimpiu Moruțan (24') and Ernesto Torregrossa (89').

In an otherwise full-strength group, there is just the sole fitness issue for the Pisa gaffer Luca D'Angelo to be concerned with. Antonio Caracciolo (Cruciate Ligament Injury) won’t be playing here.

It’s looking like Pisa and Como could both well score here although it’s hard to see a clear-cut winner.

A draw is a real possibility, as we are expecting there to be little between them. That is why we are leaning toward a very close game with a 1-1 draw at the end of this game. 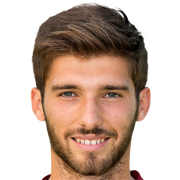 Normally taking to the field in the Striker position, Leonardo Mancuso was born in Milan, Italy. After having played his first senior match for Cittadella in the 2014 - 2015 season, the gifted Forward has struck 5 league goals in this Serie B 2022 - 2023 season so far from a total of 19 appearances.

We have made these Como v Pisa predictions for this match preview with the best intentions, but no profits are guaranteed. Please always gamble responsibly, only with money that you can afford to lose.