The Premier League tie at Goodison Park on Monday will see home side Everton ready themselves for the visit of Crystal Palace.

Our Everton v Crystal Palace tips, poll and stats can be seen in full below including the latest game odds.

Everton will be hoping to bounce back here following the 0-2 FA Cup losing effort in their last game against Manchester City.

Fewer than three goals per match were seen in 5 of the last 6 fixtures where Everton have taken part. In terms of the goal split in this period, their opponents scored a total of 6 while The Toffees got themselves 5. Such a trend might not be sustained here, of course.

Heading into this contest, Everton have not been beaten in the league by Crystal Palace in their last 12 games. A decent run, indeed.

Crystal Palace head into the game following a 1-0 Premier League win in the defeat of West Bromwich Albion in their most recent outing.

It is worth noting that Crystal Palace have had real problems scoring goals in their past six encounters, contributing the unsatisfactory return of only 4. In those matches, The Eagles have also seen the overall goal tally of their opponents equal 8.

Coming into this meeting, Crystal Palace have left without a victory over Everton when they have played them away from home in the previous 5 matches in the league. Not good.

An examination of past results between these clubs stretching back to 10/02/2018 tells us that these encounters have not been happy ones for Crystal Palace. They have not managed to register any victories at all whereas Everton have just been too good for them, finishing as winners in 67% of those ties.

A combined sum of 13 goals were shared by the two clubs throughout the course of those matches, with 10 from The Toffees and 3 belonging to The Eagles. This gives an average number of goals per game equal to 2.17.

The previous league encounter between the two was Premier League match day 3 on 26/09/2020 when the final score was Crystal Palace 1-2 Everton.

That time, Crystal Palace managed 42% possession and 8 attempts at goal with 1 on target. Their only player to score was Cheikhou Kouyaté (26').

Everton got 10 attempts on goal with 5 on target. Dominic Calvert-Lewin (10') and Richarlison (40') scored.

Everton boss Carlo Ancelotti has zero fitness worries at all before this match with a completely healthy group available for selection.

In our opinion, Everton will probably get a lot of shots on goal and make them count.

Conversely, Crystal Palace will be up against it to get shooting opportunities but we do think that it’s more than likely that they will be getting enough chances to score, too.

We’re therefore anticipating a 3-1 winning margin for Everton at the end of the 90 minutes. 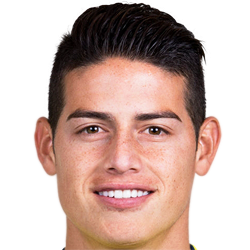 Usually played in the Right Wing position, James Rodríguez was born in Cúcuta, Colombia. After having played his first senior match for Banfield in the 2008 - 2009 season, the accomplished Forward has got 5 league goals in this Premier League 2020 - 2021 campaign to date in a total of 18 appearances.

While we have made these predictions for Everton v Crystal Palace for this match preview with the best of intentions, no profits are guaranteed. Always gamble responsibly, and with what you can afford to lose. Good luck!