Crystal Palace will be hosting visiting team Southampton at Selhurst Park in the Premier League meeting on Saturday.

Our Crystal Palace v Southampton tips, poll and stats can be seen in full below - as well as up-to-date odds.

Crystal Palace go into this match following on from a 1-1 Premier League drawn match versus Tottenham Hotspur.

Crystal Palace have found it difficult to unlock defences in more recent games. Their ‘goals for’ figure equals just 3 against opposing sides during the course of their last six matches. In those meetings, The Eagles have also seen the tally of goals that have gone against them total 13. Such a pattern might not be continued into this game, however.

Southampton will go into the match following on from a 3-1 Premier League win with the eclipse of Sheffield United in their last outing.

Over the course of their previous six clashes, Southampton have bagged a tally of 10 goals. The Saints have additionally got on the scoresheet on each one of those occasions. In that time, their defenders have had 5 goals scored by their opponents.

Inspecting their past head to head meetings going back to 16/09/2017 tells us that Crystal Palace have won 1 of these & Southampton 3, with the number of draws standing at 2.

In all, 12 goals were scored between them in this period, with 4 of them for The Eagles and 8 for The Saints. This gives an average number of goals per game equal to 2.

The previous league match featuring these clubs was Premier League match day 24 on 21/01/2020 when it finished Crystal Palace 0-2 Southampton.

That time, Crystal Palace managed 43% possession and 6 shots at goal with 0 on target.

For their opponents, Southampton got 15 attempts on goal with 6 of them on target. Nathan Redmond (22') and Stuart Armstrong (48') scored.

The match was refereed by Andre Marriner.

Crystal Palace manager Roy Hodgson has a full complement, with no fitness concerns to speak of before this match with a fully injury-free group ready to go.

We are thinking that The Eagles will possibly opt for a 4-5-1 system for this one and select Vicente Guaita, Tyrick Mitchell, Scott Dann, Martin Kelly, Joel Ward, Jeffrey Schlupp, James McArthur, Luka Milivojevic, Cheikhou Kouyate, Wilfried Zaha and Jordan Ayew.

S'hampton boss Ralph Hasenhüttl has to choose from a squad that has some fitness concerns. Sam McQueen (Cruciate Ligament Rupture) and Guido Carrillo (Hamstring Injury) will miss out on this game.

We’re of the opinion that Southampton and Crystal Palace should both be able to score here although it’s hard to pick a clear winner.

It’s looking like it could well end up as a draw. That’s why our selection here is for a close game with a 1-1 score draw when the full-time whistle blows.

Both Teams to Score Prediction for Crystal Palace vs Southampton
Yes 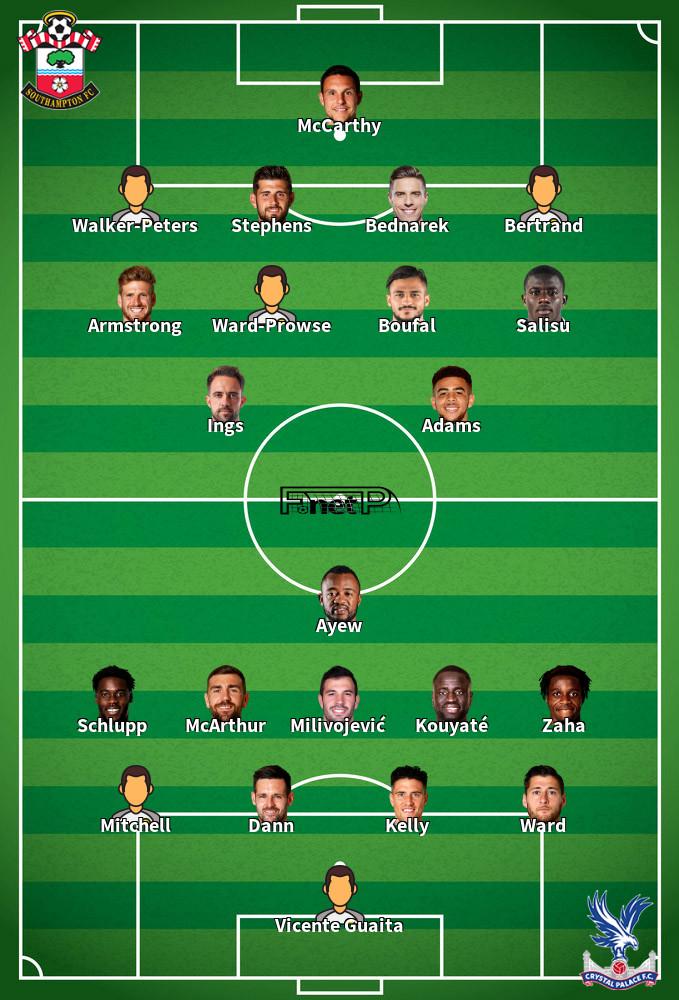 We have made these Crystal Palace v Southampton predictions for this match preview with the best intentions, but no profits are guaranteed. Please always gamble responsibly, only with money that you can afford to lose. Good luck!