CSKA Sofia will face off against visiting club Levski Sofia at Balgarska Armia Stadium in the First League clash on Saturday.

All CSKA Sofia v Levski Sofia game predictions, stats and user poll are shown below - along with the latest match odds.

CSKA Sofia fans will want a repeat of their previous result, being the 1-2 First League success against Montana.

The only scorer from CSKA Sofia was Ali Sowe (76'). Rayan Senhadji (8' Own goal) and Nikolay Minkov (78') scored for Montana.

CSKA Sofia have really been misfiring in more recent games. Their goals record equals just 4 versus opposition teams over the course of their previous six outings. In those games, The Army Men have also seen the tally of goals scored against them come to 7. It will be interesting to find out if that trend will be sustained in this game.

Leading up to this clash, CSKA Sofia:

After being beaten in their last game against Ludogorets Razgrad in First League action, Levski Sofia and their travelling supporters will be hoping that they can get a better result in this one.

Cauly Souza (84') was the scorer for Ludogorets Razgrad.

Georgi Todorov's Levski Sofia have converted 5 times throughout their previous 6 matches. The overall goals that they have conceded during the equivalent period comes to 6.

If we look at their past head to head duels dating back to 24/02/2019, there has been little to separate the clubs with CSKA Sofia winning 1 of those games, Levski Sofia 1 and 4 being draws in normal time.

A combined total of 13 goals were scored between them during those clashes, with 7 of them from The Army Men and 6 being from The Blue Avalanche. That’s an average goals per game figure of 2.17.

CSKA Sofia boss Daniel Morales has zero fitness worries whatsoever before this game with a completely healthy group available to select from.

When taking all factors into account, CSKA Sofia will likely score a couple of goals when they meet Levski Sofia, who will be up against it to score themselves.

We’re predicting a fairly comfortable 2-0 victory for CSKA Sofia at the conclusion of the game. 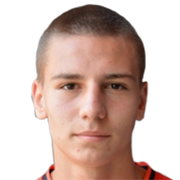 Mostly taking up the Central Defensive Midfielder position, Valentin Antov was born in Bulgaria. Having played his first senior match for CSKA Sofia in the 2018 - 2019 season, the goalscoring Midfielder has contributed 2 league goals in this First League 2020 - 2021 season so far from a total of 12 appearances.

We have made these CSKA Sofia v Levski Sofia predictions for this match preview with the best intentions, but no profits are guaranteed. Please always gamble responsibly, only with money that you can afford to lose. We wish you the best of luck.