The Superettan clash at Stora Valla on Wednesday sees home side Degerfors IF take to the field against Orgryte.

To see all of our predictions, user poll & stats for Degerfors IF v Orgryte, scroll down - plus the latest match odds.

Degerfors IF will be looking to improve on their last outing here following a 2-0 Superettan defeat last time out to Östers IF.

An interesting characteristic of more recent Degerfors IF games is seeing a zero in the scoreline.

Taking their prior sextet of clashes before this one, in 5 of them a wager on "Both Teams to Score" would've lost. Nevertheless, it remains to be seen whether such a trend shall continue on in this upcoming game.

Looking at the pre-match facts, Degerfors IF:

After tasting defeat last time out to Dalkurd FF in Superettan action, Orgryte will be hoping to turn things around here.

The only player to score from Orgryte was Marokhy Ndione (20'). Samuel Holm (45') and Filip Sjöberg (86') scored for Dalkurd FF.

It is worth noting that Orgryte have struggled for goals over their previous six encounters, recording the poor return of only 4. In those matches, Sällskapet have also seen the overall goal aggregate against them equal 11.

Taking a look at their past results, Orgryte:

Looking over their most recent head-to-head meetings dating back to 04/08/2017 shows us that Degerfors IF have won 1 of these games & Orgryte 3, with the number of draws standing at 2.

A combined sum of 13 goals were shared by the two clubs in this period, with 6 of them from Degerfors and 7 belonging to Sällskapet. This gives an average number of goals per game equal to 2.17.

Degerfors IF manager Tobias Solberg has no fitness concerns at all ahead of this game with a completely injury-free squad to pick from.

Thanks to a completely healthy squad to pick from, Orgryte boss Keith Millen does not have any fitness concerns whatsoever coming into this clash.

We’re of the view that Degerfors IF will most probably convert a lot of goal-scoring opportunities.

However, Orgryte are also probably going to find it difficult to break down their defence but we can see them getting the chances to score, too.

We’re predicting a comfortable 3-1 win for Degerfors IF at the end of the 90 minutes. 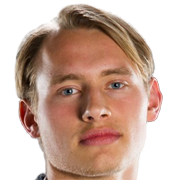 Typically deployed in the Left Attacking Midfielder position, Villiam Dahlström was born in Sweden. Having made a first senior appearance for Degerfors IF in the 2020 season, the dangerous Midfielder has struck 10 league goals in the Superettan 2020 campaign so far in 22 appearances.

While we have made these predictions for Degerfors IF v Orgryte for this match preview with the best of intentions, no profits are guaranteed. Always gamble responsibly, and with what you can afford to lose. Good luck!