Dinamo Zagreb host away side Lokomotiva Zagreb at Stadion Maksimir in this Prva Liga fixture on Saturday.

Our Dinamo Zagreb v Lokomotiva Zagreb tips, poll and stats can be seen in full below - along with the latest match odds.

Dinamo Zagreb go into this match following on from a 0-0 Prva Liga drawn match versus Gorica.

Fixtures involving Dinamo Zagreb have often been absorbing ones of late with plenty of scoring being the norm. Over their past 6 clashes alone, the sum of 20 goals have gone in for both teams combined (at an average of 3.33 goals per game) with 11 of them being chalked up by Dinamo Zagreb.

In the game prior to this, Lokomotiva Zagreb drew 0-0 in the Prva Liga tie with Varaždin.

During their 6 previous matches, Silvijo Čabraja's Lokomotiva Zagreb have had reason to celebrate scoring 6 times - yielding them the goals scored per game average of 1.

Going into this game, the form guide shows that Lokomotiva Zagreb:

Looking at their prior head-to-head clashes stretching back to 21/08/2021 shows that Dinamo Zagreb have won 3 of these and Lokomotiva Zagreb 1, with the tally of drawn games being 2.

A combined total of 12 goals were shared by the two clubs in this period, with 7 for Plavi and 5 created by Lokosi. That’s an average goals per game of 2.

The last league meeting featuring these clubs was Prva Liga match day 10 on 18/09/2022 when it ended Lokomotiva Zagreb 1-2 Dinamo Zagreb.

On that occasion, Lokomotiva Zagreb had 38% possession and 15 shots on goal with 4 of them on target. The scorer was Sandro Kulenović (14').

On the other side, Dinamo Zagreb got 12 attempts on goal with 7 of them on target. Arijan Ademi (6') and Bruno Petković (47') scored.

The referee was Ante Čulina.

The Dinamo Zagreb boss Ante Čačić has no fitness concerns whatsoever coming into this game with a fully injury-free squad ready to go.

Out of a mainly full-strength squad, there’s just the lone fitness problem for the Lokomotiva Zagreb boss Silvijo Čabraja to contend with. Jakov-Anton Vasilj (Inguinal Hernia) won’t be playing here.

We’re of the view that Dinamo Zagreb are likely to see a lot of the ball and convert quite a few goal-scoring opportunities.

At the same time, Lokomotiva Zagreb could well find it tough to score themselves although we do think that they will probably end up getting enough chances to score, too.

We’re tipping a pretty comfortable 3-1 win for Dinamo Zagreb at the end of the 90 minutes. 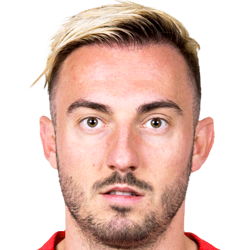 Usually used in the Striker position, Josip Drmić was born in Lachen, Switzerland. Having made a first senior appearance for FC Zürich in the 2009 - 2010 season, the goalscoring Forward has bagged 4 league goals in this HNL 2022 - 2023 campaign so far from a total of 17 appearances.

While we have made these predictions for Dinamo Zagreb v Lokomotiva Zagreb for this match preview with the best of intentions, no profits are guaranteed. Always gamble responsibly, and with what you can afford to lose.