Return to this page a few days before the scheduled game when this expired prediction will be updated with our full preview and tips for the next match between these teams.
Full-Time Result Prediction for Doncaster Rovers vs Peterborough United
Draw

We’re inclined to think that Peterborough United and Doncaster Rovers may well end up cancelling each other out here. It’s looking like it could well end up as a draw. We’re therefore expecting a close game with a 1-1 score draw at the end of this one. Scroll down for all of our predictions, poll and stats for the Doncaster Rovers v Peterborough United game (including the best match odds). 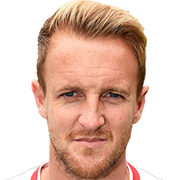 Usually playing in the Right Attacking Midfielder position, James Coppinger was born in Middlesbrough, England. After having made a senior debut playing for Hartlepool United in the 1999 - 2000 season, the talented Midfielder has struck 2 league goals in this League One 2019 - 2020 campaign to date from a total of 6 appearances.

We have made these Doncaster Rovers v Peterborough United predictions for this match preview with the best intentions, but no profits are guaranteed. Please always gamble responsibly, only with money that you can afford to lose. Best of luck with your selections.