Return to this page a few days before the scheduled game when this expired prediction will be updated with our full preview and tips for the next match between these teams.
Full-Time Result Prediction
👉
Quevilly-Rouen to Win

USL Dunkerque will visit Stade Robert-Diochon on Saturday for the Ligue 2 tie with home side Quevilly-Rouen.

Quevilly-Rouen will be looking for an improved result here following a 2-0 Ligue 2 defeat last time out to SM Caen.

A common trait of more recent Quevilly-Rouen games is the number of results with a nil in them.

From their previous six clashes before this one, in 5 of them a bet on "Both Teams to Score" would've been a losing one. That sort of trend isn’t assured to be carried forward here, though.

After tasting defeat last time out to EA Guingamp in Ligue 2 competition, USL Dunkerque and their travelling fans will hope for a better result here.

The only player to score from USL Dunkerque was Adama Niane (78'). Jérémy Livolant (20'), Youssouf M'Changama (27') and Frantzdy Pierrot (37') scored for EA Guingamp.

The attacking players from USL Dunkerque have failed to get amongst the goals over their last 6 games, recording the disappointing return of just 3. In those fixtures, Dunkerque have also seen the collective goal tally of their opponents equal 11.

The Quevilly-Rouen manager Fabien Mercadal has zero fitness worries at all coming into this clash owing to a fully healthy squad to choose from.

Due to a completely healthy squad to choose from, the USL Dunkerque boss Romain Revelli does not have any fitness concerns at all ahead of this clash.

We’re envisaging that USL Dunkerque will need to push hard to score against this Quevilly-Rouen team who we reckon should manage to get a goal of their own in a winning performance.

We’re therefore seeing a narrow 1-0 win for Quevilly-Rouen at the end of the match. 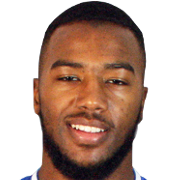 Generally deployed in the Striker position, Duckens Nazon was born in Haiti. Having made his senior debut playing for Stade Lavallois in the 2015 - 2016 season, the goalscoring Forward has bagged 8 league goals in this Ligue 2 2021 - 2022 campaign to date coming from a total of 29 appearances.

While we have made these predictions for Quevilly-Rouen v USL Dunkerque for this match preview with the best of intentions, no profits are guaranteed. Always gamble responsibly, and with what you can afford to lose. Best of luck.