Return to this page a few days before the scheduled game when this expired prediction will be updated with our full preview and tips for the next match between these teams.
Teplice arrive at Střelecký ostrov on Wednesday for the First League clash with hosts Dynamo České Budějovice. Full predictions, pre-match stats and user poll for Dynamo České Budějovice v Teplice are shown on this page (plus the best game odds).

Dynamo České Budějovice go into this fixture following on from a 0-0 First League stalemate versus Karviná.

Fewer than three goals per match were scored during 5 of the past 6 fixtures where Dynamo České Budějovice have been involved. With regard to the goal weighting during this period, opposing sides scored an aggregate of 7 and Černý managed the sum of 4.

Ahead of this clash, Dynamo České Budějovice haven't been beaten in the league by Teplice in their previous 2 games.

Since tasting defeat last time out to Baumit Jablonec in First League competition, Teplice and their travelling supporters will be hoping that they can get a better result in this one. The only scorer from Teplice was Jakub Řezníček (48'). Michal Jeřábek (20') and Miloš Kratochvíl (93') scored for Baumit Jablonec.

During their 6 previous matches, Stanislav Hejkal's Teplice have converted a total of 5 times thus earning them a goals scored per game average of 0.83.

Analysis of their past results shows that Teplice:

Looking at their prior head-to-head meetings dating back to 06/04/2012 tells us that Dynamo České Budějovice have won 4 of these games & Teplice 2, with the number of drawn results standing at 0.

20 goals were shared by the two clubs during those clashes, with 9 from Černý and 11 being from Skláři. That’s an average goals per game figure of 3.33.

The last league match between these clubs was First League match day 15 on 03/11/2019 when the final score was Teplice 1-3 Dynamo České Budějovice. The match was refereed by Zbynek Proske.

Dynamo České Budějovice manager David Horejš does not have any fitness concerns to speak of coming into this match with a completely injury-free group available for selection. 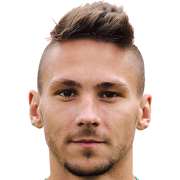 Mostly taking up the Right Wing position, Patrik Brandner was born in Czech Republic. After making a first senior appearance for 1. FK Příbram in the 2013 - 2014 season, the goalscoring Forward has bagged 5 league goals in this First League 2019 - 2020 campaign to date from a total of 23 appearances.

While we have made these predictions for Dynamo České Budějovice v Teplice for this match preview with the best of intentions, no profits are guaranteed. Always gamble responsibly, and with what you can afford to lose.