The Ligue 2 meeting at Stade de Roudourou on Saturday will see home side EA Guingamp take to the field against Grenoble.

To see all of our predictions, user poll & stats for EA Guingamp v Grenoble, scroll down - as well as the best betting odds.

EA Guingamp head into this match after a 1-1 Ligue 2 drawn result versus Valenciennes FC.

The only scorer from EA Guingamp was Frantzdy Pierrot (75'). Emmanuel Ntim (22') was the scorer for Valenciennes FC.

It has been all too rare in recent times where EA Guingamp have kept a clean sheet. The reality is that EA Guingamp have been scored against in 6 of their previous 6 clashes, giving up 11 goals along the way. It will be interesting to find out if that trend can be sustained into this next match.

Looking at their past form shows that EA Guingamp:

Following on from suffering a loss in their previous game against AJ Auxerre in Ligue 2 competition, Grenoble and their travelling fans will hope for a better result here.

Gaëtan Charbonnier (31') was the scorer for AJ Auxerre.

The forward players for Grenoble have failed to get amongst the goals over their last 6 games, netting the unsatisfactory return of only 3. In those matches, GF 38 have also seen the overall goal aggregate of their opponents equal 9.

Leading up to this clash, Grenoble:

Checking on their prior head-to-head clashes stretching back to 19/10/2007 tells us that EA Guingamp have won 1 of these games & Grenoble 2, with the number of drawn games standing at 3.

A sum of 13 goals were produced between them during those clashes, with 6 of them from Guingamp and 7 netted by GF 38. The average goals per game has been 2.17.

The last league encounter featuring these clubs was Ligue 2 match day 3 on 07/08/2021 when the final score was Grenoble 0-0 EA Guingamp.

The EA Guingamp manager Stéphane Dumont will be grateful not to have any fitness worries to speak of before this game thanks to a fully injury-free squad to pick from.

Owing to a fully injury-free group ready to go, the Grenoble boss doesn’t have any fitness concerns whatsoever before this match.

Our feeling is that Grenoble might need a bit of good fortune to score goals against this EA Guingamp team who we reckon will end up scoring and staying ahead.

We therefore think that it’s going to be a hard-fought contest, finishing with a 1-0 win for EA Guingamp at the conclusion of the game. 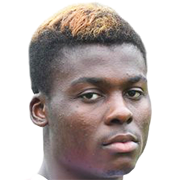 Customarily used in the Striker position, Frantzdy Pierrot was born in Cap-Haitien, Haiti. After having played his first senior match for Royal Excel Mouscron in the 2018 - 2019 season, the gifted Forward has managed to score 9 league goals in the Ligue 2 2021 - 2022 season so far in a total of 17 appearances.

While we have made these predictions for EA Guingamp v Grenoble for this match preview with the best of intentions, no profits are guaranteed. Always gamble responsibly, and with what you can afford to lose. Best of luck with your selections.