Valenciennes FC will take to the pitch with visiting club EA Guingamp at Stade du Hainaut in this Ligue 2 fixture on Saturday.

All of our predictions, stats and the user poll for Valenciennes FC v EA Guingamp are shown below - plus the latest betting odds.

Valenciennes FC will play in this match following on from a 1-1 Ligue 2 drawn result against Sochaux.

The only player to score from Valenciennes FC was Floyd Ayité (11'). Tony Mauricio (63') scored for Sochaux.

Valenciennes FC have been quite ineffective in attack in recent times. Their sum of goals equals just 3 vs opponents during their previous six fixtures. In those meetings, Valenciennes FC have also seen the tally of goals scored against them total 6. It will be interesting to see whether or not that trend can be sustained here.

Ahead of this meeting, Valenciennes FC have not emerged victorious against EA Guingamp in their previous 4 league games.

EA Guingamp will go into this match following on from a 2-1 Ligue 2 win with the downing of USL Dunkerque in their last outing.

The only name on the scoresheet from EA Guingamp was Frantzdy Pierrot (49', 55'). Malik Tchokounté (52') scored for USL Dunkerque.

Illustrating their penchant for eventful encounters, goals have been celebrated 22 times in the last six matches in which EA Guingamp have played, giving a mean average of 3.67 goals each meeting. Opposing teams have hit 13 of these goals.

Analysis of their past results shows that EA Guingamp:

Checking on their past head-to-head clashes stretching back to 26/04/2014 tells us that Valenciennes FC have won 1 of these and EA Guingamp 2, with the tally of draws standing at 3.

A combined sum of 7 goals were produced between them during those clashes, with 3 for Les Athéniens and 4 coming from Guingamp. The average goals per game has been 1.17.

The last league encounter between these sides was Ligue 2 match day 2 on 31/07/2021 and the score finished EA Guingamp 1-1 Valenciennes FC.

The Valenciennes FC manager Christophe Delmotte will be grateful not to have any fitness worries to speak of ahead of this game with a fully healthy group available to choose from.

Owing to a completely healthy group available to select from, the EA Guingamp boss Stéphane Dumont has zero fitness worries to report before this game.

We’re of the view that EA Guingamp and Valenciennes FC could both find goals hard to come by here.

Little in this one, and it’s almost too close to call. We’re therefore anticipating a very competitive game with a 0-0 scoreline at the end of the match. 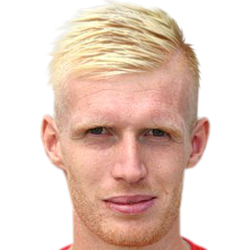 Mostly deployed in the Left Attacking Midfielder position, Gaëtan Robail was born in Saint-Pol-sur-Ternoise, France. Having made his senior debut playing for Valenciennes FC in the 2017 - 2018 season, the skilful Midfielder has scored 4 league goals in the Ligue 2 2021 - 2022 campaign to date from a total of 17 appearances.

While we have made these predictions for Valenciennes FC v EA Guingamp for this match preview with the best of intentions, no profits are guaranteed. Always gamble responsibly, and with what you can afford to lose.