The La Liga game at Estadio Martínez Valero on Saturday sees home side Elche CF take to the field against opponents Eibar.

Elche CF will be looking to improve on their last outing here after the 3-1 La Liga loss in their previous game against Celta Vigo.

It has been seldom in recent times that Elche CF haven’t conceded. It will be a concern for them that Los Franjiverdes have seen their defence breached in 6 of their previous 6 matches, giving up 12 goals during that time.

In their previous game, Eibar drew 1-1 in the La Liga tie with Real Valladolid.

Eibar have been effective going forward of late, scoring 5 goals in their previous 6 matches. Having said that, Armeros have been somewhat leaky at the back, having also been scored against in 6 of those same outings. We will find out if that trend will be continued on here.

Taking a look at their past results, Eibar:

A glance at their prior head to head meetings stretching back to 18/05/2008 shows us that Elche CF have won 3 of them & Eibar 2, with the tally of drawn matches being 1.

An aggregate of 10 goals were yielded between them in this period, with 5 from Los Franjiverdes and 5 created by Armeros. That is an average goals per game value of 1.67.

In that match, Eibar had 61% possession and 12 attempts on goal with 4 of them on target.

At the other end, Elche CF got 5 attempts at goal with 2 on target. Lucas Boyé (37') was the scorer.

There is just the lone fitness concern for the Elche CF gaffer Jorge Almiron to be concerned about due to a largely intact group. Fidel (Muscle Injury) is out of contention.

Out of a mainly full-strength group of players, there’s just the one fitness issue for the Eibar boss José Mendilíbar to contend with. Kévin Rodrigues (Muscular problems) misses out for this game.

We feel that Elche CF will have to perform well to break down this Eibar side who we reckon will just have the edge.

We’re going for a very competitive game with a 0-1 winning score for Eibar at the end of the match. 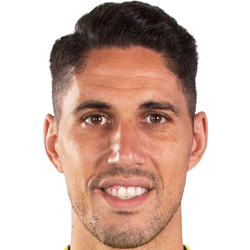 Regularly playing in the Left Attacking Midfielder position, Fidel was born in Huelva, Spain. Having made a first senior appearance for Recreativo de Huelva in the 2009 - 2010 season, the talented Midfielder has struck 4 league goals in the LaLiga 2020 - 2021 campaign so far in a total of 15 appearances.

While we have made these predictions for Elche CF v Eibar for this match preview with the best of intentions, no profits are guaranteed. Always gamble responsibly, and with what you can afford to lose. Best of luck.