The Serie B match at Stadio Comunale di Chiavari on Saturday will see hosts Entella locking horns with Salernitana.

Scroll down to see all of the predictions, poll and statistics for Entella v Salernitana - as well as the best betting odds.

Entella will be hoping to bounce back here after the 3-0 Serie B defeat in their last game at the hands of Pordenone.

In that match, Entella managed 55% possession and 11 attempts at goal with 1 on target. Pordenone got 9 attempts on goal with 5 on target. Patrick Ciurria (4'), Sebastian Musiolik (31') and Karlo Butić (90') scored for Pordenone.

Fewer than three goals per match were recorded in 5 of the last 6 fixtures where Entella have taken part. Breaking down the goal distribution from this period, their opponents scored a total of 7 while Entella totted up 1. Even so, we’ll just have to find out whether such a trend will persist in this upcoming game.

Coming into this clash, Entella are without a win at home for the past 6 matches in the league. Things will have to change soon.

Salernitana will go into this encounter following a 1-0 Serie B win in the defeat of Frosinone in their last game.

In that game, Salernitana managed 42% possession and 9 shots on goal with 4 on target. The only player to score for Salernitana was Emanuele Cicerelli (55'). Frosinone got 12 attempts at goal with 1 on target.

A series of resolute showings from the Salernitana defensive players has resulted in their ‘goals against’ tally standing at 2 from their past 6 fixtures overall. Over that same time, the number of goals that they have scored themselves amounts to 3.

Ahead of this meeting, Salernitana have not won away from home in their last 2 league matches.

A glance at their most recent head to head clashes stretching back to 20/03/2017 shows that Entella have won 1 of these and Salernitana 5, with the number of draws standing at 0.

A combined sum of 11 goals were shared by the two clubs during those clashes, with 3 of them for Entella and 8 for I granata. The average goals per game has been 1.83.

The last league clash between these sides was Serie B match day 14 on 21/12/2020 which finished with the scoreline of Salernitana 2-1 Entella.

That time, Salernitana had 54% possession and 12 shots on goal with 3 of them on target. The goalscorers were Gennaro Tutino (47') and Milan Đurić (66').

Entella had 7 attempts at goal with 1 on target. Matteo Mancosu (38') scored.

Entella manager Vincenzo Vivarini will be thankful to have no fitness worries to speak of before this match thanks to a completely injury-free group available for selection. Giuseppe De Luca is ineligible for this match because of suspension.

Salernitana boss Fabrizio Castori has multiple availability issues to deal with. Cristiano Lombardi (Muscle Injury) and Patryk Dziczek (Ill) are not ready for selection. Pawel Jaroszynski will not be able to play in this game through being suspended.

Looking at these two teams, we feel that Entella will have to work hard as a team to be putting a goal past this Salernitana side who should get the vital goal that wins it.

That’s why we have predicted a very even match with a 0-1 advantage for Salernitana at full-time. 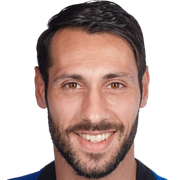 Customarily used in the Striker position, Matteo Mancosu was born in Italy. Having made his senior debut playing for Trapani in the 2013 - 2014 season, the skilful Forward has accumulated 5 league goals in this Serie B 2020 - 2021 campaign to date in 24 appearances.

While we have made these predictions for Entella v Salernitana for this match preview with the best of intentions, no profits are guaranteed. Always gamble responsibly, and with what you can afford to lose. Best of luck.