The La Liga tie at RCDE Stadium on Saturday will see home team Espanyol facing opposition in the form of Valencia.

Full predictions, stats & game poll for the Espanyol v Valencia match are shown here - along with the latest match odds.

Espanyol will be wanting a better result here following the 2-1 La Liga loss in their previous game against Alaves.

In that match, Espanyol managed 54% possession and 5 shots at goal with 3 of them on target. The only player to score for Espanyol was Raúl de Tomás (14'). Alaves had 26 attempts on goal with 9 on target. Miguel (7') and Gonzalo Escalante (59') scored for Alaves.

Espanyol haven’t exactly had impressive attacking statistics in more recent games. Their sum of goals stands at just 4 versus opposition teams over the course of their last six outings. In those games, Espanyol have also seen the number of goals that have gone against them total 10.

Heading into this contest, Espanyol haven’t won at home in the past 2 league games.

Following on from being defeated in their last game at the hands of Real Betis in La Liga action, Valencia will be aiming to make amends here.

The numbers tell their own story, and Valencia have been scored against in 5 of their last 6 matches, letting opponents get 9 goals in total. Defensively, Valencia seem to have a bit of a soft underbelly. Having said that, we’ll just have to find out if that trend might be replicated in this next game.

Coming into this contest, Valencia are without a win away from home in their last 3 league matches.

Inspecting their past head-to-head clashes going back to 08/04/2018 tells us that Espanyol have won 2 of these & Valencia 3, with the number of drawn games being 1.

10 goals were yielded between them in these games, with 5 of them from Periquitos and 5 netted by Los Che. That is an average goals per game value of 1.67.

The previous league encounter featuring these sides was La Liga match day 19 on 31/12/2021 when it finished Valencia 1-2 Espanyol.

On that occasion, Valencia had 37% possession and 12 shots on goal with 2 on target. The scorer was Omar Alderete (51').

The Espanyol boss Vicente Moreno will be grateful not to have any fitness worries at all coming into this match thanks to a completely injury-free squad available for selection.

Due to a fully injury-free squad to choose from, the Valencia manager José Bordalás does not have any fitness concerns to speak of before this game.

Our feeling is that Valencia and Espanyol might both not be able to do quite enough to get on the scoresheet here.

We’re therefore seeing a very competitive game with a 0-0 score at the end of this one. 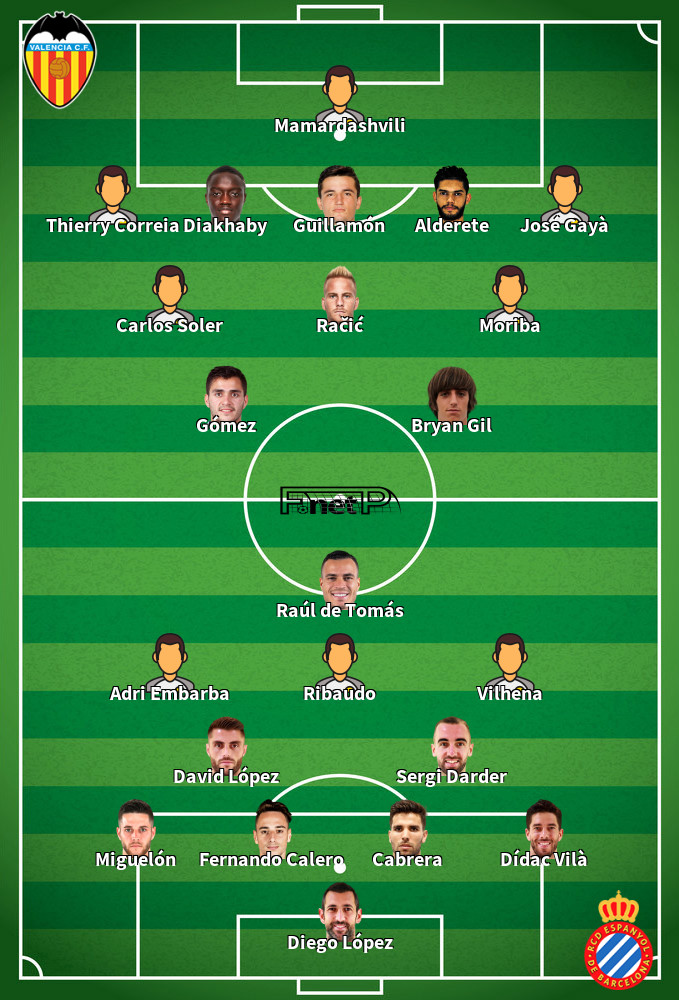