All Eupen v Union Saint-Gilloise game predictions, stats and user poll are shown below - as well as the best betting odds.

Eupen will be hoping for a better result after a 1-0 First Division A loss in their previous game against Oostende.

Eupen have been quite ineffective in attack in more recent games. Their goals record equals just 4 vs opposition teams over their last six outings. In those games, Eupen have also seen the number of goals scored against them come to 10. That pattern won’t necessarily be continued here, however.

Union Saint-Gilloise come into this encounter following a 3-2 Europa League win to beat Malmö FF in their last match.

In that match, Union Saint-Gilloise managed 66% possession and 11 shots at goal with 7 of them on target. For Union Saint-Gilloise, the goals were scored by Christian Burgess (17'), Teddy Teuma (69') and Victor Boniface (71'). On the other side, Malmö FF got 3 shots on goal with 2 on target. Joseph Ceesay (6') and Isaac Kiese Thelin (57') scored for Malmö FF.

The last league contest featuring these clubs was First Division A match day 29 on 26/02/2022 when it ended Union Saint-Gilloise 0-0 Eupen.

In that match, Union Saint-Gilloise managed 57% possession and 13 shots at goal with 2 on target.

On the other side, Eupen got 2 attempts at goal with 0 on target.

There aren’t many selection issues, with just the lone fitness concern for the Eupen boss Bernd Storck to be concerned about from an otherwise complete group. Sibiry Keita (Muscle Injury) misses out.

With a fully healthy group available for selection, the Union Saint-Gilloise boss Karel Geraerts does not have any fitness worries to report coming into this clash.

We’re thinking that Eupen will have a tough ask to score goals against this Union Saint-Gilloise lineup who will likely get the vital goal that wins it.

We therefore fancy a hard-fought contest, finishing with a 0-1 winning score for Union Saint-Gilloise at the end of the 90. 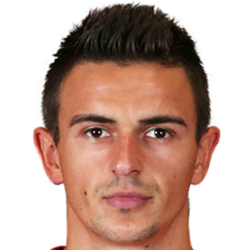 Regularly playing in the Striker position, Smail Prevljak was born in Konjic, Bosnia and Herzegovina. After making a first senior appearance for RB Leipzig in the 2014 - 2015 season, the accomplished Forward has managed to score 2 league goals in this First Division A 2022 - 2023 season to date coming from a total of 6 appearances.

We have made these Eupen v Union Saint-Gilloise predictions for this match preview with the best intentions, but no profits are guaranteed. Please always gamble responsibly, only with money that you can afford to lose. Best of luck with your selections.