Famalicão face off with visiting rivals Portimonense at Estádio Municipal 22 de Junho in the Primeira Liga match on Saturday.

Our tips, poll and stats for Famalicão v Portimonense can all be found here (plus the best game odds).

Famalicão, buoyed by their previous result, will be hoping for more of the same after the 2-5 Primeira Liga success against Boavista.

Over their prior six games, Ivo Vieira's Famalicão have found the net a combined total of 11 times, an average number of goals scored per match equal to 1.83.

Going into this one, Famalicão are without a home win in the past 5 league games. Fans are getting restless.

Portimonense head into the clash after a 2-0 Primeira Liga win versus Belenenses in their previous match.

The trend of at least one team drawing a blank in games featuring Portimonense has become apparent recently. Examining their last six games shows that this has occurred 5 times. In these clashes, opposing sides have hit a goal total of 6 and Portimonense have scored 5.

Looking at their past head to head results going back to 02/10/2016 reveals that these encounters have not been good ones for Famalicão. They have not managed to get any victories whatsoever while Portimonense have just been too good for them, getting wins in 83% of those matches played.

A total of 13 goals were scored between the two sides in these games, with 4 from Famalicenses and 9 netted by Portimonense. This gives an average number of goals per game equal to 2.17.

The last league game between these sides was Primeira Liga match day 27 on 18/04/2021 when the final score was Famalicão 0-1 Portimonense.

On that day, Famalicão had 58% possession and 18 shots at goal with 2 on target.

At the other end, Portimonense got 10 attempts on goal with 4 of them on target. Beto (45') scored.

The match was refereed by Luis Godinho.

The Famalicão boss Ivo Vieira will be happy not to have any fitness worries at all coming into this game owing to a fully healthy squad ready to go.

Due to a completely healthy squad ready to go, the Portimonense manager Paulo Sérgio doesn’t have any fitness concerns whatsoever ahead of this clash.

We’re of the view that Portimonense have enough to put a goal past this Famalicão lineup, although that might not be as many as they will have scored against them.

We’re expecting a tight encounter finishing with a 2-1 advantage for Famalicão at full-time. Should be an interesting one. 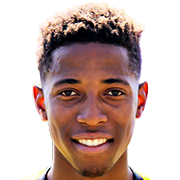 Regularly playing in the Striker position, Simon Banza was born in France. Having made his senior debut playing for RC Lens in the 2015 - 2016 season, the accomplished Forward has got 7 league goals in this Liga Portugal 2021 - 2022 season to date in 7 appearances.

While we have made these predictions for Famalicão v Portimonense for this match preview with the best of intentions, no profits are guaranteed. Always gamble responsibly, and with what you can afford to lose. Good luck!