Fatih Karagümrük will take to the pitch with away team Hatayspor at Atatürk Olimpiyat Stadyumu in this Super Lig clash on Tuesday.

Our tips, poll and stats for Fatih Karagümrük v Hatayspor can all be found here - as well as the best betting odds.

Fatih Karagümrük will play in this match following on from a 0-0 Super Lig tied result versus Çaykur Rizespor.

A common trait of more recent Fatih Karagümrük games is the high number of scores with a nil in them.

Taking their previous 6 matches before this one, in as many as 5 of them a wager on BTTS would've lost.

Hatayspor head into the meeting after a 3-0 Super Lig win with the defeat of Galatasaray in their most recent match.

In that match, Hatayspor had 41% possession and 4 shots on goal with 3 of them on target. For Hatayspor, the goalscorers were Mame Biram Diouf (21', 72') and Rúben Ribeiro (29'). On the other side, Galatasaray got 2 attempts at goal with 0 on target.

The stats tell the story, and Hatayspor have been scored against in 5 of their last 6 matches, seeing their opponents hit 7 goals in total. Defensively, Hatayspor have not been doing too well. It will be interesting to find out whether or not that trend will be sustained here.

Coming into this clash, Hatayspor haven’t won away from home in the past 2 league games.

The previous league contest featuring the two was Super Lig match day 12 on 12/12/2020 when the final score was Hatayspor 3-1 Fatih Karagümrük.

We’re inclined to think that Hatayspor are certainly able to break down this Fatih Karagümrük lineup, although it possibly won’t be enough to avoid defeat.

Our selection here is for both teams to score in a 2-1 winning margin for Fatih Karagümrük at full-time. We’ll have to see what happens. 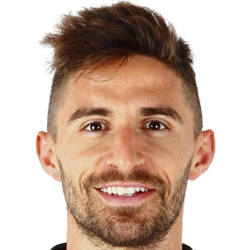 Usually playing in the Left Wing position, Fabio Borini was born in Bentivoglio, Italy. Having made his senior debut playing for Chelsea in the 2009 - 2010 season, the goalscoring Forward has struck 5 league goals in the Süper Lig 2020 - 2021 campaign so far in 14 appearances.

We have made these Fatih Karagümrük v Hatayspor predictions for this match preview with the best intentions, but no profits are guaranteed. Please always gamble responsibly, only with money that you can afford to lose. Good luck with your selections.