RB Leipzig will do battle with the visiting Augsburg at Red Bull Arena in this Bundesliga 1 fixture on Sunday.

For all of our match predictions, pre-game poll and statistics for RB Leipzig v Augsburg, scroll down including the latest game odds.

RB Leipzig will be wanting a better result here after the 3-1 Europa League defeat in their last game at the hands of Rangers.

In that game, RB Leipzig managed 62% possession and 11 shots on goal with 2 on target. The scorer for RB Leipzig was Christopher Nkunku (71'). For their opponents, Rangers had 8 shots at goal with 4 of them on target. James Tavernier (19'), Glen Kamara (24') and John Lundstram (81') scored for Rangers.

RB Leipzig haven’t had any problems with scoring, hitting the target every time they’ve gone out to play in their last 6 matches.

They’ve managed to rack up 7 during that time while seeing the number of goals scored against them stand at 9.

Coming into this clash, RB Leipzig have not lost a league tie with Augsburg in their last 8 matches. A long run without a loss.

After tasting defeat last time out to Cologne in Bundesliga 1 competition, Augsburg and their travelling supporters will be hoping that they can get a better result in this one.

During their six previous matches, Markus Weinzierl's Augsburg have turned their attacks into goals 8 times thus earning them a goals scored per game average of 1.33.

A quick look at their past head to head results stretching back to 21/12/2019 shows that these encounters have not been kind to Augsburg. They have not managed to get any victories at all whereas RB Leipzig have been superior, finishing as winners in 83 per cent of those matches played.

A combined total of 17 goals were scored between them during those clashes, with 13 from Leipzig and 4 belonging to Augsburg. That’s an average goals per game of 2.83.

The last league encounter between the two was Bundesliga 1 match day 16 on 15/12/2021 and the score finished Augsburg 1-1 RB Leipzig.

On that day, Augsburg had 31% possession and 9 attempts on goal with 1 of them on target. Their only player to score was Daniel Caligiuri (86').

Almost everyone can be considered, as there’s just the lone fitness concern for the RB Leipzig manager Domenico Tedesco to be concerned with from of an almost fully healthy squad. Amadou Haidara (Medial Collateral Ligament Injury) won’t play. Mohamed Simakan cannot play in this game through suspension.

It looks to us like Augsburg will have a difficult task to be scoring even one goal against a RB Leipzig team who will more than likely get a big win and also probable clean sheet.

We’re tipping a commanding 3-0 margin for RB Leipzig at the end of the game. 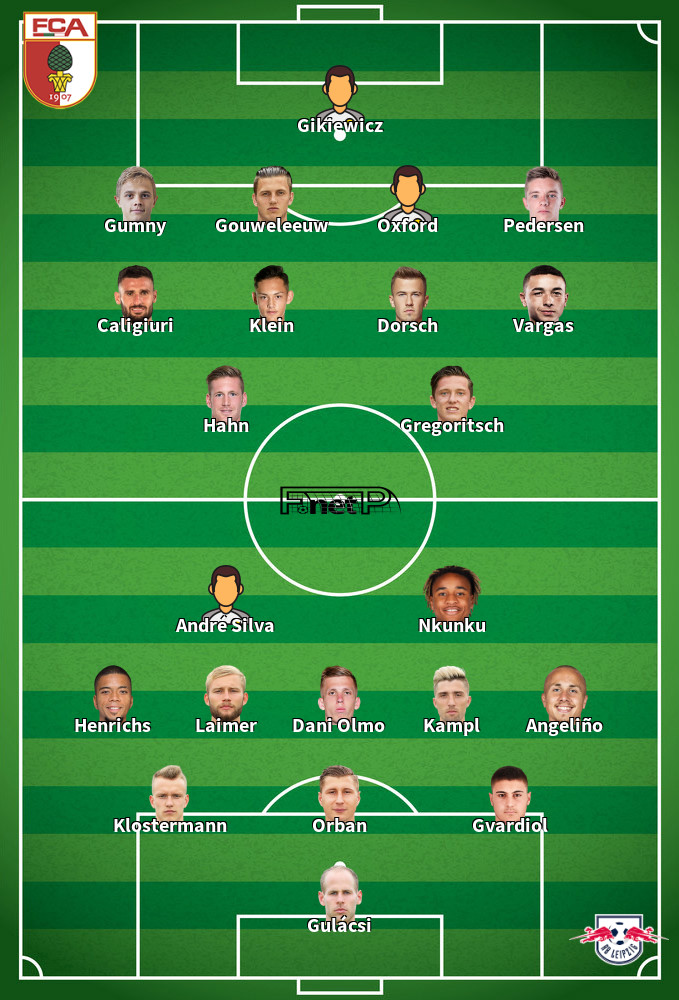 Normally deployed in the Striker position, André Silva was born in Baguim do Monte, Portugal. After making a first senior appearance for Porto in the 2015 - 2016 season, the talented Forward has netted 10 league goals in the Bundesliga 2021 - 2022 season to date from a total of 31 appearances.

While we have made these predictions for RB Leipzig v Augsburg for this match preview with the best of intentions, no profits are guaranteed. Always gamble responsibly, and with what you can afford to lose.