Tuesday’s Champions League schedule brings us Barcelona fighting it out with Ferencvárosi TC.

All of our predictions, stats and the user poll for Barcelona v Ferencvárosi TC are shown below - as well as the best betting odds.

Barcelona will be hoping for a better result following a 1-0 La Liga defeat last time out to Getafe.

In that game, Barcelona managed 73% possession and 6 attempts at goal with 1 on target. On the other side, Getafe CF got 8 shots on goal with 4 of them on target. Jaime Mata (56') scored for Getafe.

Matches involving Barcelona have usually been exciting affairs lately with plenty of scoring being a real hallmark. Over their past half dozen games, a grand total of 24 goals have gone in for both sides combined (at an average of 4 goals per game) with 13 of them being chalked up by Barça. Nevertheless, we will just have to wait and see whether that pattern might be sustained in this game.

Ferencvárosi TC will go into this match following on from a 0-2 Nemzeti Bajnokság I win as they beat Kisvárda in their last game.

The only name on the scoresheet from Ferencvárosi TC was Isael (66'). Roman Karasyuk (89' Own goal) scored for Kisvárda.

Serhiy Rebrov's Ferencvárosi TC have managed to stick the ball in the net 14 times throughout their latest 6 matches. The overall goals that they have conceded during the equivalent period adds up to 5.

We believe that Barcelona can and should have the majority of the possession and should be able to turn a few of their chances into goals.

At the other end, Ferencvárosi TC could well struggle to find the back of the net but do we see them scoring.

We’re tipping a fairly comfortable 3-1 winning margin for Barcelona at the end of the match. 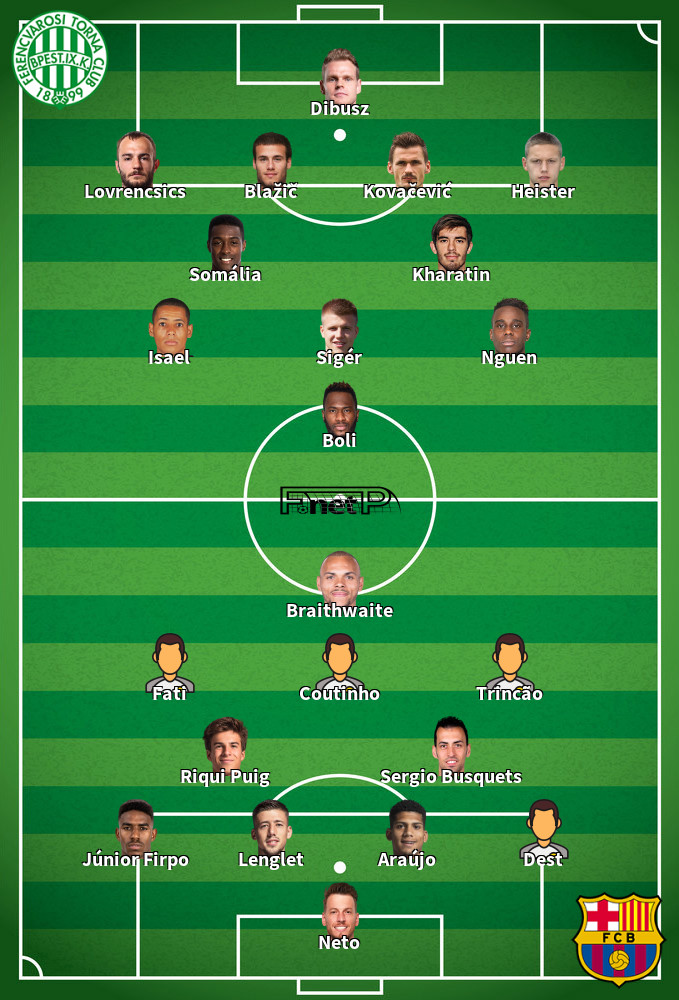 Mostly playing in the Left Wing position, Ansu Fati was born in Bissau, Guinea-Bissau. Having made a first senior appearance for FC Barcelona in the 2019 - 2020 season, the accomplished Forward has bagged 3 league goals in this LaLiga 2020 - 2021 campaign so far in a total of 3 appearances.

We have made these Barcelona v Ferencvárosi TC predictions for this match preview with the best intentions, but no profits are guaranteed. Please always gamble responsibly, only with money that you can afford to lose. Best of luck with your selections.