Getafe will take to the pitch with visiting side Barcelona at Estadio Coliseum Alfonso Pérez in this La Liga match on Sunday.

Scroll down to see all of the predictions, poll and statistics for Getafe v Barcelona - along with the latest match odds.

Getafe enter this fixture following on from a 0-0 La Liga drawn game against Barcelona.

Under three goals per match were scored during 5 of the past 6 meetings where Getafe have been involved. Regarding the goal attribution in this period, opposition teams scored a total of 5 while Getafe managed a tally of 4.

Looking at the pre-match facts, Getafe:

The stats don’t lie, and Barcelona have been scored against in 5 of their last 6 games, seeing opposing sides hit 5 goals overall. In defence, Barcelona can certainly do much better. With no two games being the same, we will just have to wait and see if the trend shall be sustained here in this game.

Ahead of this meeting, Barcelona are unbeaten in their last 14 away league matches. Amazing.

Inspecting their most recent head to head clashes going back to 12/05/2019 shows that Getafe have won 1 of them & Barcelona 5, with the tally of drawn results standing at 0.

A combined total of 18 goals were produced between them in this period, with 5 of them for Azulones and 13 for Barça. The average number of goals per game works out to 3.

The last league contest featuring the two was La Liga match day 3 on 29/08/2021 and the score finished Barcelona 2-1 Getafe.

On that day, Barcelona managed 67% possession and 7 shots on goal with 3 on target. Goals were scored by Sergi Roberto (2') and Memphis Depay (30').

At the other end, Getafe had 8 shots on goal with 3 on target. Sandro Ramírez (18') scored.

Regarding absentees, there’s just the lone fitness concern for the Getafe gaffer Quique Sánchez Flores to be concerned about thanks to an otherwise robust set of players. Jaime Mata (Shoulder Injury) is out of contention.

Barcelona boss Xavi Hernández has a number of players out of action. Ronald Araújo (Concussion), Moussa Wagué (Fitness), Sergiño Dest (Muscle Injury), Eric García (Hand Injury), Nico González (Fractured Toe), Gerard Piqué (Tear in the abductor muscle), Sergi Roberto (Muscle Injury) and Pedri (Hamstring Injury) will miss out on this game. Moussa Wagué will not be able to play in this game through being suspended.

We feel that in this game, Getafe would be disappointed if they were not to score against this Barcelona lineup, however a single goal may not quite be good enough.

Therefore, we think that it’s going to be a 1-2 advantage for Barcelona at the end of the 90 minutes. There looks to be little in this one. 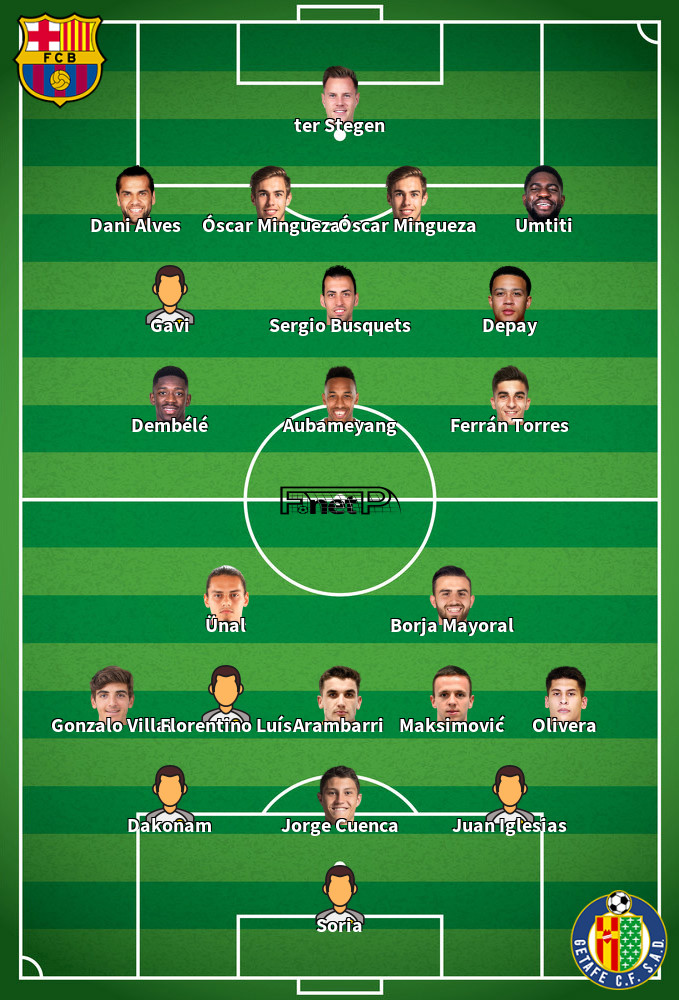