The La Liga clash at Estadio de la Cerámica on Sunday will see home side Villarreal prepare for the visit of Barcelona.

View all Villarreal v Barcelona tips, stats and our pre-match poll below - plus the latest match odds.

Villarreal are hoping to win again after their last result, the 0-2 La Liga triumph over Real Betis.

Their most recent results reveal that much respect should be given to the Villarreal defence. El Submarino Amarillo have kept it tight, with the number of goals that have flown into the back of their net during their previous six outings standing at 2.

Analysis of their past results shows that Villarreal:

In their last fixture, Barcelona drew 2-2 in the La Liga tie with Atlético Madrid.

In that game, Barcelona had 72% possession and 12 attempts at goal with 5 on target. The scorer for Barcelona was Lionel Messi (50'). On the other side, Atlético de Madrid got 10 shots at goal with 3 on target. Diego Costa (11' Own goal) and Saúl Ñíguez (19', 62') scored for Atlético Madrid.

A run of effective showings by the Barcelona defence has resulted in the number of goals they’ve conceded standing at 4 from their last 6 fixtures overall. In that period of time, the number of goals that they have scored themselves amounts to 11. That kind of pattern might not be sustained into this next game, of course.

A study of their past head to head meetings stretching back to 06/05/2017 tells us that these encounters have been a source of anguish for Villarreal. They’ve not managed to get any wins whatsoever whereas Barcelona have been superior, beating them in 83 per cent of those match-ups.

Those games weren’t short on goals, either, with 26 in total at an average of 4.33 goals per match.

The previous league meeting between these sides was LaLiga match day 6 on 24/09/2019 which ended up with the score at Barcelona 2-1 Villarreal.

That day, Barcelona managed 57% possession and 8 attempts at goal with 4 of them on target. The scorers were Antoine Griezmann (6') and Arthur Melo (15').

Villarreal got 11 shots on goal with 3 of them on target. Santi Cazorla (44') was the scorer.

There aren’t many selection issues, with just one fitness concern for the Villarreal boss Javier Calleja to be concerned with due to a largely intact squad. Ramiro Funes Mori (Achilles tendon problems) misses out.

Barcelona manager Quique Setién has not got a full squad to pick from. Frenkie de Jong (Muscle Injury) and Ousmane Dembélé (Hamstring Injury) will not be playing here.

Looking at these two teams, we feel that Barcelona should convert a lot of goal-scoring opportunities.

In contrast, Villarreal could well struggle to break down their defence but we do think that it’s more than likely that they will be scoring here as well.

Accordingly, we see a decent 1-3 win for Barcelona when the referee blows the final whistle.

Both Teams to Score Prediction for Villarreal vs Barcelona
Yes 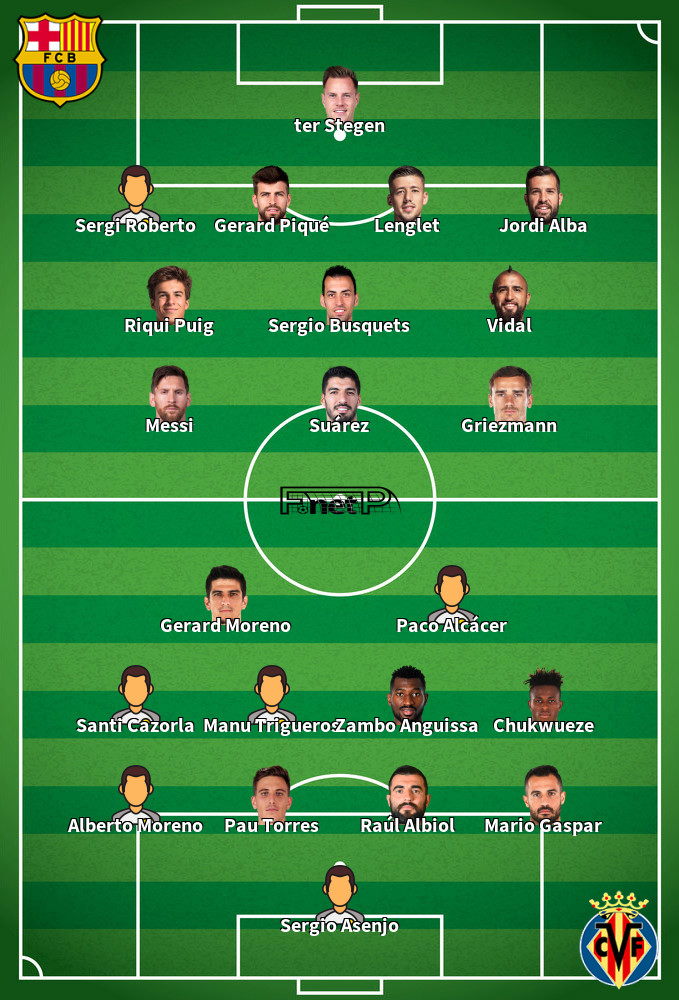 Typically deployed in the Centre Midfield position, Santi Cazorla was born in Llanera, Spain. After having made a senior debut playing for Villarreal CF in the 2003 - 2004 season, the goalscoring Midfielder has managed 8 league goals in the LaLiga 2019 - 2020 season so far in 29 appearances.

While we have made these predictions for Villarreal v Barcelona for this match preview with the best of intentions, no profits are guaranteed. Always gamble responsibly, and with what you can afford to lose. Good luck!