FC Luzern line up against guests FC Basel 1893 at Swissporarena in this Super League clash on Sunday.

Our predictions, user poll and statistics for FC Luzern v FC Basel 1893 can be found here - plus the latest betting odds.

FC Luzern will be looking to improve on their last outing here after a 3-1 Super League defeat last time out to Lugano.

Under three goals per game were seen in 5 of the last 6 fixtures where FC Luzern have taken part. Regarding the goal distribution during this period, opposition teams scored a total of 6 while FC Luzern totted up 7. However, we’ll just have to find out whether that trend will persist in this upcoming game or not.

Going into this contest, FC Luzern haven't beaten FC Basel 1893 in their previous 6 matches in the league.

FC Basel 1893 go into this match following a 2-3 Conference League win with the eclipse of Kairat in their previous match.

A review of past results between these clubs stretching back to 03/08/2020 tells us that these encounters have been miserable for FC Luzern. They’ve not been able to get any victories whatsoever whereas FC Basel 1893 have dominated them, running out winners in 67 per cent of those games where they have faced each other.

The previous league match between these sides was Super League match day 9 on 03/10/2021 which finished with the scoreline of FC Basel 1893 1-1 FC Luzern.

On the other side, FC Luzern got 12 attempts at goal with 8 of them on target. Jordy Wehrmann (78') was the scorer.

The FC Luzern boss Fabio Celestini has no fitness worries at all before this game thanks to a completely injury-free squad available to choose from.

Due to a completely injury-free squad available to select from, the FC Basel 1893 manager Patrick Rahmen has zero fitness worries whatsoever ahead of this clash.

FC Basel 1893 and FC Luzern should both be able to score more than once here although it’s hard to pick a clear winner.

We’ll see, but this looks like it could end up all-square with both teams likely to score. That’s why we have predicted a very even contest with a draw when the full-time whistle blows. 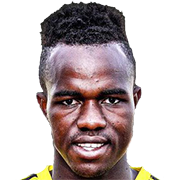 Normally taking up the Left Attacking Midfielder position, Ibrahima Ndiaye was born in Senegal. Having made a first senior appearance for FC Luzern in the 2019 - 2020 season, the dangerous Midfielder has netted 3 league goals in this Super League 2021 - 2022 campaign to date coming from a total of 11 appearances.

While we have made these predictions for FC Luzern v FC Basel 1893 for this match preview with the best of intentions, no profits are guaranteed. Always gamble responsibly, and with what you can afford to lose.