The Super League match at Stadio Cornaredo on Wednesday will see home team Lugano up against opponents in FC Basel 1893.

For all of our match predictions, pre-game poll and statistics for Lugano v FC Basel 1893, scroll down - as well as up-to-date odds.

Lugano will be hoping for a better result after the 1-0 Super League losing effort in their last game against FC Zürich.

Maurizio Jacobacci's Lugano have celebrated scoring a sum total of 7 times over their prior half-dozen outings. The tally of goals that have been scored against them in that time is 6.

A look at their previous results shows us that Lugano:

FC Basel 1893 will go into this meeting following on from a 2-0 Super League win in the defeat of FC Sion in their previous outing.

Over the course of their last six clashes, FC Basel 1893 have bagged a total of 12 goals. Bebbi have also not failed to score on each one of those occasions. During those fixtures, they have had 5 goals go against them. We will just have to find out whether or not that trend will be sustained into this next match.

In all, 19 goals were shared by the two clubs throughout the course of those matches, with 7 of them from Lugano and 12 created by Bebbi. That’s an average goals per game figure of 3.17.

The referee was Léonce Lionel Tschudi.

Basel boss Marcel Koller has to contend with a number of unavailable players. Ricky van Wolfswinkel (Cals Sclerosis), Luca Zuffi (Cruciate Ligament Rupture) and Edon Zhegrova (Medial Collateral Ligament Injury) will miss out on this game. Omar Alderete will not be able to play in this game through being suspended.

Our assessment here is that Lugano could find themselves up against it to score against this FC Basel 1893 lineup who will likely be able to get on the scoresheet themselves in a winning performance.

With that in mind, we reckon that it will be a hard-fought contest, finishing with a 0-1 winning score for FC Basel 1893 at the end of the 90. 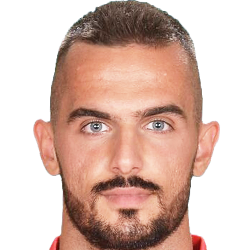 Normally playing in the Left Wing position, Filip Holender was born in Kragujevac, Serbia. Having played his first senior match for Budapest Honvéd FC in the 2012 - 2013 season, the skilful Forward has got 3 league goals in this Super League 2019 - 2020 season so far in a total of 19 appearances.

We have made these Lugano v FC Basel 1893 predictions for this match preview with the best intentions, but no profits are guaranteed. Please always gamble responsibly, only with money that you can afford to lose. Good luck if you do place a bet today.