Return to this page a few days before the scheduled game when this expired prediction will be updated with our full preview and tips for the next match between these teams.
Full-Time Result Prediction
👉
Los Angeles Galaxy to Win

View all of the Los Angeles Galaxy v FC Dallas predictions, poll and stats below - plus the latest betting odds.

Los Angeles Galaxy, following on from their previous result, will be hoping for more of the same after the 2-3 Open Cup triumph over California United Strikers.

Their more recent scorelines highlight the fact that it has been a great time for the Los Angeles Galaxy defence. Los Angeles Galaxy have been mean at the back, resulting in the total number of goals that have gone past their goalkeeper over the course of their last 6 outings standing at 2.

After suffering a loss in their previous game against Sporting Kansas City in Open Cup competition, FC Dallas will be aiming to make amends here.

Nico Estévez's FC Dallas have converted a total of 10 times in the course of their most recent six matches. The overall goals that they have conceded during those same clashes adds up to 8.

A look at their most recent head to head meetings stretching back to 31/05/2018 shows us that Los Angeles Galaxy have won 2 of them and FC Dallas 3, with the number of drawn results standing at 1.

A sum of 21 goals were scored between the two sides throughout the course of those matches, with 9 of them for The Galactics and 12 being from Toros. The average number of goals per game works out to 3.5.

The last league fixture featuring these sides was MLS match day 41 on 24/10/2021 which finished with the scoreline of Los Angeles Galaxy 2-2 FC Dallas.

In that game, Los Angeles Galaxy had 59% possession and 12 shots on goal with 6 on target. The scorers were Javier Hernández (65') and Sebastian Lletget (83').

For their opponents, FC Dallas got 12 attempts at goal with 8 of them on target. Jesús Ferreira (30') and Franco Jara (41') scored.

The match was refereed by Baldomero Toledo.

It doesn’t get much better regarding selection, with just a single fitness concern for the Los Angeles Galaxy gaffer Greg Vanney to be concerned with from an otherwise fully-primed squad. Adam Saldaña (Ankle Injury) will miss out.

Owing to a fully healthy group available to select from, the FC Dallas boss Nico Estévez doesn’t have any fitness worries whatsoever before this clash.

In our opinion, FC Dallas will have their work cut out to get anything against this Los Angeles Galaxy outfit who we reckon should get the win and a maybe even keep a clean sheet as well.

We’re therefore expecting a hard-fought contest, finishing with a 1-0 win for Los Angeles Galaxy at full-time. 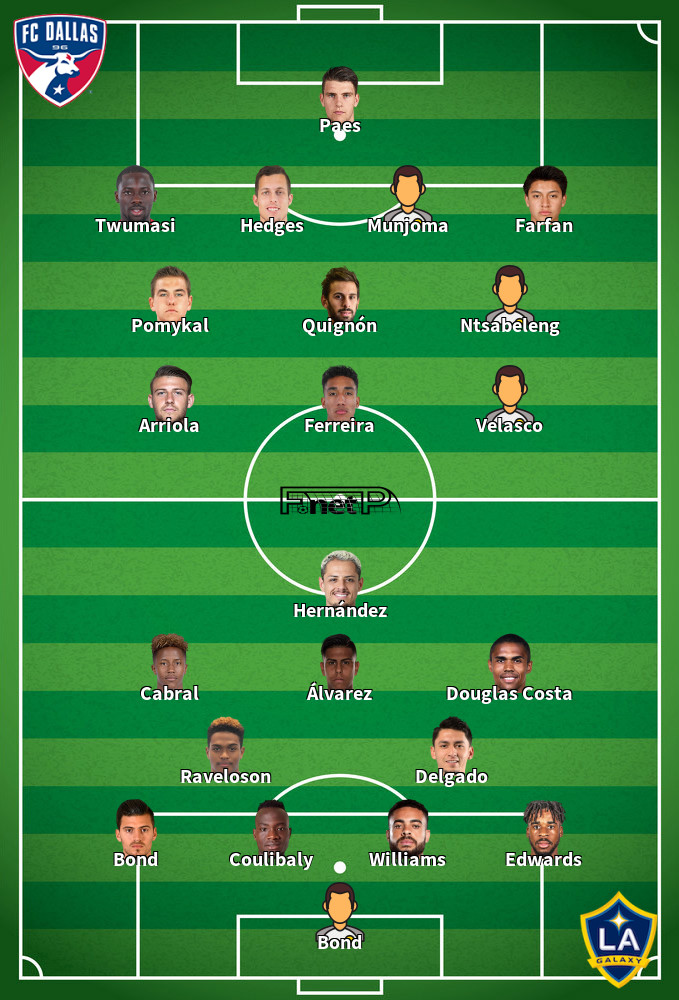 We have made these Los Angeles Galaxy v FC Dallas predictions for this match preview with the best intentions, but no profits are guaranteed. Please always gamble responsibly, only with money that you can afford to lose. Best of luck.