To see all of our predictions, user poll & stats for FC Dordrecht v Telstar, scroll down (including the best match odds).

FC Dordrecht will be hoping to return to winning ways here following a 3-1 Eerste Divisie defeat in their last game at the hands of Excelsior.

In that match, FC Dordrecht had 44% possession and 8 shots at goal with 1 on target. The only player on the scoresheet for FC Dordrecht was Nikolas Agrafiotis (29'). For their opponents, Excelsior had 18 attempts at goal with 8 of them on target. Marouan Azarkan (47'), Julian Baas (60') and Thijs Dallinga (93') scored for Excelsior.

Heading into this contest, FC Dordrecht have not won at home in their last 7 league matches. Their supporters are understandably frustrated.

In their previous fixture, Telstar drew 1-1 in the Eerste Divisie tie with Almere City.

The stats don’t lie, and Telstar have been scored against in 6 of their last 6 matches, seeing their opponents hit 14 goals overall. Defensively, Telstar could really do with shoring things up. Such a trend might not be continued into this next game, however.

Ahead of this clash, Telstar have not won away from home in their last 12 matches in the league. A poor run.

Looking at their prior head-to-head meetings going back to 02/03/2018 tells us that FC Dordrecht have won 1 of these games & Telstar 5, with the number of draws being 0.

A combined total of 19 goals were shared by the two clubs in these games, with 6 for Schapenkoppen and 13 created by Witte Leeuwen. The average number of goals per game works out to 3.17.

The previous league contest between these sides was Eerste Divisie match day 30 on 29/03/2021 and the score finished FC Dordrecht 1-0 Telstar.

That time, FC Dordrecht managed 45% possession and 11 attempts at goal with 6 on target. The scorer was Kevin Jansen (64').

Telstar had 18 attempts on goal with 4 on target.

In our opinion, Telstar have the ability to get a lot of shots on goal and make them count.

At the same time, FC Dordrecht might well find it a difficult task getting goals, although we do see them getting the chances to score, too.

We reckon that it will be a controlled 1-3 margin for Telstar come full-time. 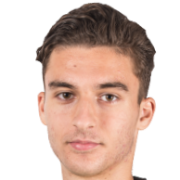 Generally taking to the field in the Striker position, Nikolas Agrafiotis was born in 's-Hertogenbosch, Netherlands. After having made a senior debut playing for FC Dordrecht in the 2020 - 2021 season, the accomplished Forward has contributed 3 league goals in the Eerste Divisie 2021 - 2022 season so far in a total of 6 appearances.

While we have made these predictions for FC Dordrecht v Telstar for this match preview with the best of intentions, no profits are guaranteed. Always gamble responsibly, and with what you can afford to lose. Best of luck.