The Eerste Divisie tie at Frans Heesenstadion on Friday will see hosts FC Oss facing opposition in the form of FC Emmen.

For all of our match predictions, pre-game poll and statistics for FC Oss v FC Emmen, scroll down (including the best match odds).

FC Oss will be hoping to return to winning ways here after a 2-1 Eerste Divisie loss in their previous game against FC Eindhoven.

Matches involving FC Oss have tended to be absorbing ones recently with plenty of scoring being a real hallmark. Over their past half dozen games, a grand total of 22 goals have been recorded for both sides combined (at an average of 3.67 goals per game) with 6 of these coming from FC Oss.

Their past results show that FC Oss:

After being defeated in their last game at the hands of Excelsior in Eerste Divisie competition, FC Emmen and their travelling supporters will be hoping that they can get a better result in this one.

In that match, FC Emmen managed 66% possession and 15 attempts at goal with 5 of them on target. For their opponents, Excelsior had 6 shots on goal with 1 on target. Thijs Dallinga (32') scored for Excelsior.

A run of reliable displays from the FC Emmen defensive players has resulted in their ‘goals against’ tally standing at 4 from their past 6 fixtures overall. Over that same period, their own attack force has managed to score 12. Such a pattern might not follow through into this next game, of course.

Looking over their past head-to-head clashes stretching back to 07/08/2015 shows us that FC Oss have won 1 of these and FC Emmen 3, with the number of drawn games standing at 2.

A sum of 18 goals were yielded between them throughout the course of those matches, with 7 for TOP Oss and 11 netted by Rood-Witten. That’s an average goals per game of 3.

The previous league encounter featuring the two was Eerste Divisie match day 29 on 12/03/2018 which ended up with the score at FC Oss 2-3 FC Emmen.

The FC Oss boss Bob Peeters has zero fitness worries at all coming into this match with a completely injury-free squad to pick from.

FC Emmen manager Dick Lukkien has not got a full squad to pick from. Jeff Hardeveld (Knock), Lentini Caciano (Knee Injury), Reda Kharchouch (Muscle partial avulsion), Lucas Bernadou (Knock) and Peet Bijen (Heel Bone Injury) are those who can’t be considered. Miguel Araujo will not be able to play in this game through being suspended.

We think that FC Oss might have a difficult job to hit the back of the net against this FC Emmen lineup who we think should win and very possibly keep a clean sheet.

Our tip is therefore for a narrow 0-1 win for FC Emmen at the end of this game. 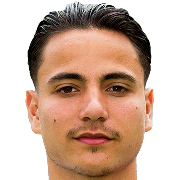 Regularly used in the Right Wing position, Justin Mathieu was born in Goirle, Netherlands. After making a first senior appearance for Willem II in the 2013 - 2014 season, the skilful Forward has scored a sum of 2 league goals in the Eerste Divisie 2021 - 2022 campaign to date in a total of 10 appearances.

While we have made these predictions for FC Oss v FC Emmen for this match preview with the best of intentions, no profits are guaranteed. Always gamble responsibly, and with what you can afford to lose. Best of luck.