Return to this page a few days before the scheduled game when this expired prediction will be updated with our full preview and tips for the next match between these teams.
Full-Time Result Prediction
👉
FC Haka to Win

FC Haka will be taking on visiting opponents FC Lahti at Tehtaan kenttä in this Veikkausliiga clash on Saturday.

Our tips, poll and stats for FC Haka v FC Lahti can all be found here - as well as the best betting odds.

Their more recent scorelines shine a light on the fact that not much more can be done by the FC Haka rearguard. FC Haka have given the opposition little, seeing the number of goals that have flown into the back of their net during their last six clashes standing at 3.

Taking a look at their past results, FC Haka:

FC Lahti head into the encounter after a 2-1 Veikkausliiga win against KTP in their previous match.

The stats tell the story, and FC Lahti have been scored against in 5 of their last 6 matches, with opponents netting 8 goals overall. In defence, FC Lahti have not been doing too well. In any event, time will tell if that pattern will be sustained in this upcoming game.

Leading up to this clash, FC Lahti:

A review of their most recent head to head meetings dating back to 20/06/2012 shows that FC Haka have won 2 of these games and FC Lahti 1, with the number of drawn matches being 3.

An aggregate of 12 goals were scored between them in this period, with 6 of them from Haka and 6 netted by Mustat kuhnurit. This gives an average number of goals per game equal to 2.

The previous league clash featuring the two was Veikkausliiga match day 19 on 13/08/2021 which ended up with the score at FC Lahti 0-2 FC Haka.

In that game, FC Lahti had 55% possession and 7 shots on goal with 1 on target.

The referee was Ville Nevalainen.

The FC Haka manager Teemu Tainio will be happy not to have any fitness concerns to speak of ahead of this clash owing to a fully healthy group available to select from.

Thanks to a completely injury-free squad available to select from, the FC Lahti manager Ilir Zeneli has no fitness worries to speak of coming into this match.

We envisage that FC Lahti certainly have the ability to score a goal against this FC Haka side, however that realistically won’t be enough to prevent defeat.

Our selection here is for a 2-1 win for FC Haka at the end of the match. Should be an interesting one. 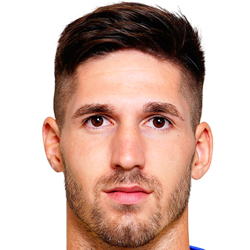 Mostly deployed in the Striker position, Aleksandar Vučenović was born in Austria. After having made a senior debut playing for SKN St. Pölten in the 2016 - 2017 season, the accomplished Forward has accumulated 4 league goals in the Veikkausliiga 2021 campaign to date in 15 appearances.

While we have made these predictions for FC Haka v FC Lahti for this match preview with the best of intentions, no profits are guaranteed. Always gamble responsibly, and with what you can afford to lose.