KuPS are going up against visiting rivals FC Haka at Väre Areena in the Veikkausliiga match on Thursday.

Scroll down for all of our predictions, poll and stats for the KuPS v FC Haka game (inc. the best betting odds).

KuPS head into this match following on from a 1-1 Veikkausliiga drawn result against IFK Mariehamn.

Their most recent results really do illustrate the point that not much more can be done by the KuPS defence. KuPS have been stingy, with the number of goals that have gone in at their end during their previous six matches standing at 4.

Ahead of this meeting, KuPS haven't been defeated in their previous 14 league matches at home. What a fantastic run.

Following on from suffering a loss in their previous game against VPS Vaasa in Veikkausliiga competition, FC Haka and their travelling supporters will be hoping that they can get a better result in this one.

In that match, FC Haka had 55% possession and 9 shots on goal with 2 on target. On the other side, VPS Vaasa got 9 shots at goal with 6 of them on target. Tete Yengi (72') and Aleksi Pahkasalo (93') scored for VPS Vaasa.

The numbers tell their own story, and FC Haka have been scored against in 5 of their last 6 games, letting opponents get 10 goals in all. In defence, FC Haka have not been doing too well. That trend won’t necessarily follow through here, of course.

Heading into this contest, FC Haka haven't been defeated by KuPS in away games against them for the last 3 league games.

Looking at their prior head-to-head clashes stretching back to 29/07/2012 shows us that KuPS have won 3 of these & FC Haka 2, with the number of drawn matches being 1.

19 goals were yielded between them during those clashes, with 11 from Keltamusta and 8 belonging to Haka. The average number of goals per game works out to 3.17.

The previous league match between the two was Veikkausliiga match day 14 on 11/07/2021 when the final score was FC Haka 0-1 KuPS.

On that occasion, FC Haka managed 33% possession and 6 attempts on goal with 5 of them on target.

For their opponents, KuPS had 8 shots on goal with 6 on target. Diogo Tomás (45') scored.

The referee was Joni Hyytia.

The KuPS manager Simo Valakari will be grateful not to have any fitness worries at all before this clash with a fully healthy squad to choose from.

Thanks to a mainly available group of players, there is only a single fitness problem for the FC Haka boss Teemu Tainio to be concerned with. Vigori Gbe (Knee Injury) won’t be playing here.

Our assessment is that KuPS should dominate possession and create several successful chances.

At the same time, FC Haka will be up against it finding the net themselves but do we see them hitting back at some stage here.

We’re tipping a pretty comfortable 3-1 win for KuPS at the conclusion of the game. 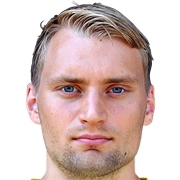 Customarily taking to the field in the Striker position, Tim Väyrynen was born in Finland. Having made a first senior appearance for FC Honka in the 2010 season, the gifted Forward has managed to score 4 league goals in this Veikkausliiga 2022 campaign to date coming from a total of 5 appearances.

We have made these KuPS v FC Haka predictions for this match preview with the best intentions, but no profits are guaranteed. Please always gamble responsibly, only with money that you can afford to lose. Best of luck.