Return to this page a few days before the scheduled game when this expired prediction will be updated with our full preview and tips for the next match between these teams.
Full-Time Result Prediction
👉
FC Lausanne-Sport to Win

All of our predictions, stats and the user poll for FC Lausanne-Sport v FC Luzern are shown below - along with the latest match odds.

FC Lausanne-Sport are hoping to win again after their last result, a 4-3 Super League success vs St Gallen.

Matches featuring FC Lausanne-Sport have proved to be entertaining encounters recently with plenty of scoring the rule rather than the exception. Over their past half dozen clashes alone, the sum total of 20 goals have flown in for both teams combined (at an average of 3.33 goals per game) with 11 of those accredited to Lausanne. Previous results aside, we’ll just have to find out whether that pattern will persist in this upcoming game.

Heading into this contest, FC Lausanne-Sport have not lost a league tie with FC Luzern in their previous 2 games.

In their last game, FC Luzern drew 1-1 in the Super League match with FC Sion.

The numbers tell their own story, and FC Luzern have been scored against in 6 of their last 6 matches, seeing their opponents hit 11 goals in total. Defensively, Die Leuchten have some weaknesses to address.

Checking on their past head to head clashes going back to 23/09/2017 shows that FC Lausanne-Sport have won 3 of these and FC Luzern 2, with the tally of drawn results standing at 1.

In all, 20 goals were scored between them in this period, with 11 of them from Lausanne and 9 for Die Leuchten. The average number of goals per game works out to 3.33.

The previous league encounter between the two was Super League match day 13 on 20/12/2020 which finished with the scoreline of FC Lausanne-Sport 2-1 FC Luzern.

We’re envisaging that FC Luzern will have their work cut out to see themselves scoring against this FC Lausanne-Sport side who we reckon will manage to get a goal of their own in a winning performance.

We therefore fancy a hard-fought 1-0 advantage for FC Lausanne-Sport at the conclusion of the game. 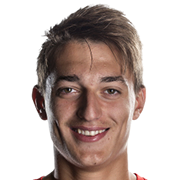 Mostly playing in the Striker position, Aldin Turkeš was born in Zug, Switzerland. After making a first senior appearance for FC Zürich in the 2015 - 2016 season, the dangerous Forward has struck 6 league goals in this Super League 2020 - 2021 campaign so far in a total of 13 appearances.

We have made these FC Lausanne-Sport v FC Luzern predictions for this match preview with the best intentions, but no profits are guaranteed. Please always gamble responsibly, only with money that you can afford to lose. Good luck with your selections.