The FC Luzern v St Gallen live stream video is ready to be broadcast on 05/03/2021. Supporters of the teams can watch this game on a live streaming service if this match is featured in the schedule referenced above. Here we show helpful information for watching this Super League game including the most recent team form, h2h clashes and our game views.

In order to watch the match using alternative methods, check broadcasters’ listings in your local region. Such broadcasting contracts are generally allocated on a per-competition/league or even per-game arrangement basis. For fixtures shown live on regional television programmes, check the listings on stations like BT Sport, Amazon Prime Video, Sky Sports, Now TV, iTV, Canal+, Fox Soccer, ESPN depending on your location.

Where the abovementioned broadcaster indicates that they have the FC Luzern v St Gallen football live streaming coverage, you can see the game on your mobile (iPhone, Android including Infinix) and PC or even tablet (eg iPad, Huawei MatePad).

After the match finishes, we might also provide a link to the match highlights from time to time. We are not responsible for the transmission of any match video content linked to from here. All legal issues must be dealt with via the hosters/owners of this content.

St Gallen will visit Swissporarena on Sunday for the Super League clash with hosts FC Luzern.

View all of the FC Luzern v St Gallen predictions, poll and stats below including the latest game odds.

FC Luzern will be hoping for a repeat of their last result, following the 1-2 Super League success versus FC Zürich.

It’s been all too rare in recent times that FC Luzern haven’t conceded. The facts show that Die Leuchten have failed to prevent opponents from scoring in 5 of their previous 6 games, giving up 8 goals on the way.

Following on from a loss in their previous game against Servette FC in Super League competition, St Gallen and their travelling fans will hope for a better result here.

St Gallen have seen success in front of goal of late, scoring 9 goals in their last 6 matches. Having said that, Espen can also improve defensively after being scored against in 6 of those same matches. Despite that, it remains to be seen if that pattern shall be maintained in this match or not.

Analysis of their past results shows that St Gallen:

Looking over their prior head to head clashes going back to 20/07/2019 shows us that FC Luzern have won 2 of these games and St Gallen 3, with the tally of drawn games being 1.

A total of 20 goals were scored between the two sides during those clashes, with 8 for Die Leuchten and 12 belonging to Espen. That’s an average goals per game of 3.33.

The last league clash featuring these sides was Super League match day 16 on 17/02/2021 which ended up with the score at St Gallen 2-1 FC Luzern.

With a fully injury-free group to choose from, St Gallen manager Peter Zeidler has no fitness worries to report ahead of this game.

We feel that St Gallen and FC Luzern should be able to score more than one goal each in what is shaping up to be a fairly even contest.

There shouldn’t be much in it, and a high-scoring draw looks to be quite a realistic result. That’s why we have predicted a very competitive game with a draw at the end of this game. 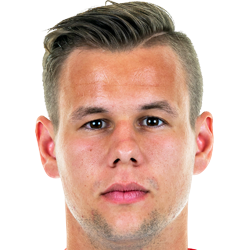 Customarily deployed in the Central Attacking Midfielder position, Louis Schaub was born in Fulda, Germany. Having made a first senior appearance for Rapid Vienna in the 2012 - 2013 season, the goalscoring Midfielder has bagged 4 league goals in this Super League 2020 - 2021 season so far coming from a total of 22 appearances.

We have made these FC Luzern v St Gallen predictions for this match preview with the best intentions, but no profits are guaranteed. Please always gamble responsibly, only with money that you can afford to lose. Best of luck with your selections.

⚽️ Where can I find the predictions for other Super League games?

You can see all of our upcoming (and previous) Super League predictions & previews here.