Roda JC Kerkrade will be hosting guests FC Oss at Parkstad Limburg Stadion in this Eerste Divisie meeting on Friday.

To see all of our predictions, user poll & stats for Roda JC Kerkrade v FC Oss, scroll down - plus the latest match odds.

In that game, Roda JC Kerkrade had 63% possession and 18 shots at goal with 4 of them on target. The only player on the scoresheet for Roda JC Kerkrade was Stefano Marzo (87'). FC Volendam had 8 attempts on goal with 4 of them on target. Robert Mühren (27'), Boy Deul (76' Own goal) and Denso Kasius (85') scored for FC Volendam.

Matches with Roda JC Kerkrade have usually been exciting affairs of late with high scoring the rule rather than the exception. Over their past half dozen games alone, a grand total of 24 goals have flown in for both teams combined (at an average of 4 goals per game) with 13 of those accredited to Roda JC Kerkrade.

Heading into this fixture, Roda JC Kerkrade have not won at home in their last 3 league games.

Bob Peeters's FC Oss have slotted home 9 times throughout their latest six matches. The total of goals that they have conceded during those same clashes adds up to 8.

Going into this one, FC Oss have not won away from home in their last 2 matches in the league.

Inspecting their past head to head clashes dating back to 30/11/2018 shows us that Roda JC Kerkrade have won 3 of these and FC Oss 1, with the tally of drawn matches being 2.

A sum of 15 goals were shared by the two clubs in these games, with 11 for De Koempels and 4 netted by TOP Oss. This gives an average number of goals per game equal to 2.5.

The last league match between these clubs was Eerste Divisie match day 38 on 12/05/2021 which finished with the scoreline of FC Oss 2-0 Roda JC Kerkrade.

For their opponents, Roda JC Kerkrade had 16 shots at goal with 4 of them on target.

There aren’t many selection issues, with just a single fitness concern for the Roda JC Kerkrade boss Jurgen Streppel to be concerned about from of an almost fully healthy group of players. Florian Mayer (Unknown Injury) won’t play.

Thanks to a largely available group, there is only the sole fitness issue for the FC Oss gaffer Bob Peeters to be concerned about. Roshon van Eijma (Achilles tendon problems) won’t be in action.

Looking at these two teams, we feel that Roda JC Kerkrade should dominate possession and create several successful chances.

In contrast, FC Oss will not find it easy getting goals but we do think that it’s more than likely that they will be seeing enough of the ball to score, too.

We’re predicting a controlled 3-1 victory for Roda JC Kerkrade at the end of the 90 minutes. 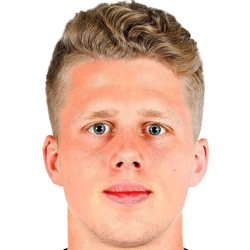 Typically taking to the field in the Centre Midfield position, Xian Emmers was born in Lugano, Switzerland. After having made a senior debut playing for Cremonese in the 2018 - 2019 season, the skilful Midfielder has managed to score 2 league goals in the Eerste Divisie 2021 - 2022 season to date coming from a total of 4 appearances.

While we have made these predictions for Roda JC Kerkrade v FC Oss for this match preview with the best of intentions, no profits are guaranteed. Always gamble responsibly, and with what you can afford to lose. Best of luck.