To see all of our predictions, user poll & stats for Tondela v Porto, scroll down (plus the best game odds).

Tondela will be looking for a repeat result of the 1-2 Primeira Liga victory over Vitória Guimarães.

It has not been often in recent times where Tondela haven’t conceded. The reality is that Auriverdes have been scored against in 5 of their previous 6 clashes, giving up 10 goals in the process. Regardless, we’ll just have to find out whether that pattern will be sustained in this game.

Ahead of this meeting, Tondela are winless against Porto in their previous 9 league matches.

Since a losing effort in their last game against Chelsea in Champions League competition, Porto and their travelling fans will hope for a better result here.

In the course of their 6 previous matches, Sérgio Conceição's Porto have seen their efforts on goal rewarded 10 times - giving them a goals per game average of 1.67.

Going into this one, Porto haven't been defeated in their previous 9 league matches away from home. Travelling very well.

A review of past results between these clubs stretching back to 19/01/2018 tells us that these fixtures have been disappointments for Tondela. They’ve not managed to get any wins whatsoever whereas Porto have been superior, winning in 100 per cent of those games where they have faced each other.

19 goals were produced between them in these games, with 4 from Auriverdes and 15 coming from Dragões. The average number of goals per game works out to 3.17.

The last league encounter between these clubs was Primeira Liga match day 9 on 05/12/2020 when it ended Porto 4-3 Tondela.

Porto boss Sérgio Conceição has not got a full squad to pick from. Francisco Meixedo (Corona virus), Iván Marcano (Muscle Injury) and Diogo Costa (Corona virus) are not ready for selection.

In our opinion, Tondela are certainly able to find the net against this Porto team, although one goal probably won’t be as many as they will have scored against them.

Our selection here is for a very close game with a 1-2 win for Porto at the end of the 90 minutes. Let’s see what eventuates. 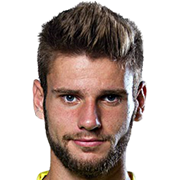 Mostly playing in the Left Attacking Midfielder position, Mario González was born in Burgos, Spain. Having made his senior debut playing for Villarreal in the 2016 - 2017 season, the skilful Midfielder has scored a sum of 9 league goals in this Primeira Liga 2020 - 2021 campaign so far in 18 appearances.

We have made these Tondela v Porto predictions for this match preview with the best intentions, but no profits are guaranteed. Please always gamble responsibly, only with money that you can afford to lose. We wish you the best of luck.