The Primeira Liga meeting at Estádio do Dragão on Sunday will see home side Porto prepare for the visit of Vitória Guimarães.

Our predictions, user poll and statistics for Porto v Vitória Guimarães can be found here - plus the latest match odds.

Porto will be wanting a better result here following the 2-0 Champions League loss in their previous game against Liverpool.

Sérgio Conceição's Porto have hit the target a sum total of 12 times in their preceding 6 outings. At the other end, the number of goals that have been scored against them in those same games amounts to 5.

Their previous form shows that Porto:

Vitória Guimarães will go into this clash following a 2-1 Primeira Liga win as they beat Moreirense in their last game.

Vitória Guimarães have attacked well in the lead-up to this encounter, having scored 9 goals in their last 6 matches. This doesn’t mask the fact that Vitória Guimarães can also improve defensively after being scored against in 6 of those same outings.

Heading into this fixture, Vitória Guimarães have not won against Porto when they've played them away from home in the last 2 league games.

Inspecting their prior head to head meetings dating back to 25/08/2018 shows us that Porto have won 4 of these and Vitória Guimarães 1, with the number of draws standing at 1.

17 goals were yielded between them during those clashes, with 11 of them from Dragões and 6 coming from Os Vimaranenses. That’s an average goals per game of 2.83.

The previous league game between the two was Primeira Liga match day 28 on 22/04/2021 which ended up with the score at Porto 1-0 Vitória Guimarães.

Vitória Guimarães had 4 shots at goal with 1 on target.

The referee was Tiago Martins.

The Porto boss Sérgio Conceição does not have any fitness worries to speak of ahead of this clash owing to a fully healthy group to pick from.

Owing to a fully injury-free group ready to go, the Vitória Guimarães boss Pepa Marques da Costa doesn’t have any fitness concerns to report before this match.

It looks to us that Porto can create the chances to score more than once when they play Vitória Guimarães, who may well find it hard to score.

We’re tipping a pretty comfortable 2-0 win for Porto at the end of the match. 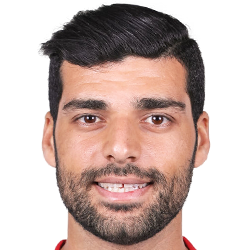 Customarily used in the Striker position, Mehdi Taremi was born in Boushehr, Iran. Having played his first senior match for Rio Ave in the 2019 - 2020 season, the dangerous Forward has managed 7 league goals in the Liga Portugal 2021 - 2022 season so far coming from a total of 11 appearances.

While we have made these predictions for Porto v Vitória Guimarães for this match preview with the best of intentions, no profits are guaranteed. Always gamble responsibly, and with what you can afford to lose. Good luck!