WSG Swarovski Tirol will be hoping to return to winning ways here after the 2-1 Bundesliga loss in their previous game against Austria Klagenfurt.

Their past results show that WSG Swarovski Tirol:

Red Bull Salzburg will go into the meeting following a 0-1 Bundesliga win to beat TSV Hartberg in their most recent fixture.

Looking at their prior head-to-head clashes going back to 31/08/2019 tells us that WSG Swarovski Tirol have won 1 of them & Red Bull Salzburg 5, with the tally of drawn games being 0.

Loads of goals were seen in those games, too - 32 overall at an average of 5.33 goals per meeting.

The previous league fixture between these clubs was Bundesliga match day 10 on 22/05/2021 when it finished Red Bull Salzburg 4-0 WSG Swarovski Tirol.

At the other end, WSG Swarovski Tirol had 11 attempts on goal with 2 of them on target.

The WSG Swarovski Tirol boss Thomas Silberberger does not have any fitness concerns at all ahead of this match with a fully healthy squad to choose from.

In our view, WSG Swarovski Tirol are likely to put a goal past this Red Bull Salzburg team, although just one goal is unlikely to prevent defeat.

We are therefore anticipating a close game with a 1-2 advantage for Red Bull Salzburg at the end of this one. It’s a very tough call. 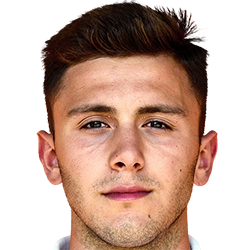 Customarily playing in the Striker position, Giacomo Vrioni was born in San Severino Marche, Italy. After having played his first senior match for Venezia in the 2018 - 2019 season, the skilful Forward has scored 3 league goals in this Bundesliga 2021 - 2022 season so far in a total of 5 appearances.

While we have made these predictions for WSG Swarovski Tirol v Red Bull Salzburg for this match preview with the best of intentions, no profits are guaranteed. Always gamble responsibly, and with what you can afford to lose. Good luck if you do place a bet today.