Fenerbahçe will visit Medical Park Stadyumu on Sunday for the Super Lig game with hosts Trabzonspor.

Our Trabzonspor v Fenerbahçe predictions, statistics and match poll can be seen below - as well as up-to-date odds.

Trabzonspor, buoyed by their previous result, will be hoping for more of the same after the 1-2 Super Lig success vs Kayserispor.

Trabzonspor haven’t been able to stop scoring goals, netting in each and every one of their last 6 matches.

They have totted up the amount of 9 during that time while also conceding a total of 6. That sort of trend isn’t assured to be continued here, though.

Their previous form shows that Trabzonspor:

Fenerbahçe go into this encounter following on from a 2-1 Super Lig win as they beat Kasimpasa in their most recent outing.

The numbers tell their own story, and Fenerbahçe have been scored against in 6 of their last 6 matches, conceding 9 goals in all. In defence, Fenerbahçe can certainly do much better.

Checking out their prior head to head meetings dating back to 25/11/2018, both clubs have shared the honours with Trabzonspor winning 2 of those games, Fenerbahçe 2 and 2 being drawn in regulation time.

A total of 15 goals were produced between them throughout the course of those matches, with 7 from Karadeniz Fırtınası and 8 netted by Sarı Kanaryalar. That is an average goals per game value of 2.5.

The previous league match featuring the two was Super Lig match day 27 on 28/02/2021 when the final score was Trabzonspor 0-1 Fenerbahçe.

In that game, Trabzonspor managed 48% possession and 15 attempts on goal with 1 of them on target.

For their opponents, Fenerbahçe got 12 shots on goal with 8 on target. Dimitris Pelkas (76') was the scorer.

Thanks to a fully injury-free squad available to select from, the Fenerbahçe boss Vítor Pereira has no fitness worries whatsoever coming into this game.

We’re envisaging that Fenerbahçe will need to apply a lot of pressure to score goals against this Trabzonspor team who will likely score one, at least.

We therefore fancy a very competitive encounter with a 1-0 winning margin for Trabzonspor at the end of this game. 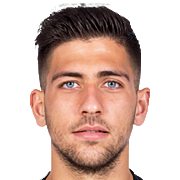 Mostly taking up the Striker position, Anastasios Bakasetas was born in Greece. After having played his first senior match for Asteras Tripolis in the 2009 - 2010 season, the goalscoring Forward has netted 5 league goals in the Süper Lig 2021 - 2022 campaign to date from a total of 8 appearances.

While we have made these predictions for Trabzonspor v Fenerbahçe for this match preview with the best of intentions, no profits are guaranteed. Always gamble responsibly, and with what you can afford to lose. Good luck if you do place a bet today.