Ferencvárosi TC will be at Mezőkövesdi Városi Stadion on Sunday for the Nemzeti Bajnokság I tie with hosts Mezőkövesd.

Our Mezőkövesd v Ferencvárosi TC predictions, statistics and match poll can be seen below - plus the latest match odds.

Mezőkövesd prepare for this game following on from a 1-1 Nemzeti Bajnokság I drawn game vs Zalaegerszegi TE.

The only player to score from Mezőkövesd was Dániel Nagy (92'). Márk Koszta (70') scored for Zalaegerszegi TE.

A look at their previous results shows us that Mezőkövesd:

Since tasting defeat last time out to Real Betis in Europa League action, Ferencvárosi TC and their travelling fans will hope for a better result here.

A tendency of at least one team not scoring a goal in games involving Ferencvárosi TC has become noticeable recently. Examining their last 6 meetings reveals that it’s occurred 5 times. In these clashes, opposing sides have hit a goal aggregate of 5 while Ferencvárosi TC have scored 11. We will find out if that trend will be sustained in this game.

Looking at their past head-to-head clashes stretching back to 22/02/2020 shows that Mezőkövesd have won 1 of them & Ferencvárosi TC 4, with the number of drawn matches being 1.

19 goals were scored between the two sides in this period, with 7 of them for Mezőkövesd and 12 for Fradi. The average goals per game has been 3.17.

The last league game between these clubs was Nemzeti Bajnokság I match day 3 on 14/08/2021 when it ended Ferencvárosi TC 4-1 Mezőkövesd.

The match was refereed by Csaba Pintér.

The Mezőkövesd boss Attila Supka does not have any fitness concerns to speak of before this game owing to a fully healthy group ready to go.

Owing to a fully injury-free squad available to select from, the Ferencvárosi TC boss Peter Stöger doesn’t have any fitness worries at all ahead of this match.

Our assessment here is that Mezőkövesd will have a tough ask to score against this Ferencvárosi TC outfit who should gain the upper hand.

We’re therefore anticipating a very even contest with a 0-1 winning score for Ferencvárosi TC when all is said and done. 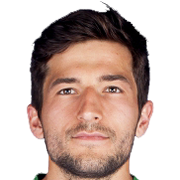 Regularly deployed in the Striker position, Dániel Nagy was born in Hungary. Having made his senior debut playing for Osnabruck in the 2012 - 2013 season, the skilful Forward has contributed 3 league goals in this Nemzeti Bajnokság I 2021 - 2022 campaign so far in 11 appearances.

While we have made these predictions for Mezőkövesd v Ferencvárosi TC for this match preview with the best of intentions, no profits are guaranteed. Always gamble responsibly, and with what you can afford to lose. Good luck!