To see all of our predictions, user poll & stats for FC Twente v Feyenoord, scroll down - along with the latest match odds.

FC Twente go into this game following a 2-2 Eredivisie draw versus Vitesse.

Their most recent results highlight the fact that much respect should be given to the FC Twente rearguard. FC Twente have been mean at the back, with the total number of goals that have flown into the back of their net over the course of their past 6 outings standing at 4.

Heading into this contest, FC Twente are undefeated in their last 10 home league matches. A run that they'll hope to extend here.

Feyenoord will go into the game following on from a 2-0 Eredivisie win as they beat NEC in their most recent fixture.

A succession of hard-working showings from the Feyenoord defensive unit has resulted in the number of goals they’ve conceded amounting to 4 from their past 6 outings combined. In that time, their own attack force has managed to score 15. With no two games being the same, it remains to be seen whether that pattern shall be replicated in this upcoming game or not.

A look at their previous results shows us that Feyenoord:

Inspecting their past head-to-head meetings dating back to 20/09/2020 shows that FC Twente have won 2 of these games and Feyenoord 1, with the tally of draws standing at 3.

A combined total of 14 goals were scored between the two sides in these games, with 7 from De Tukkers and 7 coming from De club aan de Maas. That’s an average goals per game figure of 2.33.

The previous league meeting featuring the two was Eredivisie match day 9 on 09/10/2022 which finished with the scoreline of Feyenoord 2-0 FC Twente.

The FC Twente boss Ron Jans will be grateful to have no fitness worries to speak of coming into this clash owing to a fully healthy squad to choose from.

In an otherwise full-strength group, there is just a single fitness issue for the Feyenoord gaffer Arne Slot to be concerned about. Gernot Trauner (Knee Surgery) misses out for this game.

We’re inclined to think that Feyenoord and FC Twente may well both score at least one goal each although picking a clear a winner isn’t easy.

An eventful draw is therefore a real possibility, and we are expecting it to be very tight. We’re therefore expecting a very competitive encounter with a 2-2 draw when the full-time whistle blows. 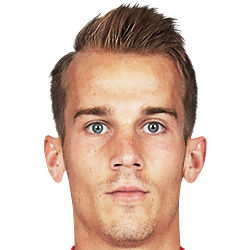 Customarily played in the Right Wing position, Václav Černý was born in Příbram, Czech Republic. Having played his first senior match for Jong Ajax in the 2014 - 2015 season, the skilful Forward has bagged 5 league goals in the Eredivisie 2022 - 2023 season to date in 15 appearances.

We have made these FC Twente v Feyenoord predictions for this match preview with the best intentions, but no profits are guaranteed. Please always gamble responsibly, only with money that you can afford to lose.