Sandefjord arrive at Haugesund Stadion on Sunday for the Eliteserien meeting with home side FK Haugesund.

All FK Haugesund v Sandefjord game predictions, stats and user poll are shown below - plus the latest betting odds.

FK Haugesund enter this game following on from a 1-1 Eliteserien drawn result versus Viking FK.

In that game, FK Haugesund had 47% possession and 10 shots on goal with 5 on target. The only player on the scoresheet for FK Haugesund was Kristoffer Velde (64'). At the other end, Viking FK had 13 shots at goal with 4 on target. Veton Berisha (59') scored for Viking FK.

In their prior six fixtures, Jostein Grindhaug's FK Haugesund have found the net a total of 12 times - an average number of goals scored per match equal to 2.

Taking a look at their past results, FK Haugesund:

In their last game, Sandefjord drew 2-2 in the Eliteserien tie with SK Brann.

Throughout their six most recent matches, Hans Ødegaard's Sandefjord have had reason to celebrate scoring a total of 6 times, yielding them a goals per game average of 1.

Heading into this fixture, Sandefjord have not won away from home in their last 7 league matches.

Checking on their past head to head results going back to 15/10/2017 tells us that these fixtures have been a source of anguish for Sandefjord. They’ve not been able to get themselves any victories at all while FK Haugesund have remained in the ascendancy, getting wins in 83 per cent of those games where they have faced each other.

A sum of 18 goals were produced between them throughout the course of those matches, with 13 of them for FKH and 5 netted by Guttane. The average goals per game has been 3.

The last league contest featuring the two was Eliteserien match day 1 on 21/07/2021 when it ended Sandefjord 1-1 FK Haugesund.

In that match, Sandefjord managed 47% possession and 9 shots at goal with 5 on target. The goalscorers were Sander Mørk (23') and Alexander Ruud Tveter (58' Own goal).

On the other side, FK Haugesund had 7 shots on goal with 2 on target.

The FK Haugesund boss Jostein Grindhaug doesn’t have any fitness concerns to speak of ahead of this match thanks to a completely healthy group available to choose from.

With a completely injury-free squad available to select from, the Sandefjord boss Hans Ødegaard does not have any fitness worries at all ahead of this match.

Looking at these two teams, we feel that FK Haugesund are likely to have the majority of the possession and should be able to turn a few of their chances into goals.

Conversely, Sandefjord may well struggle to break down their defence - but, we do see them managing to get on the scoresheet, too.

We therefore think that it’s going to be a decent 3-1 winning score for FK Haugesund at full-time. 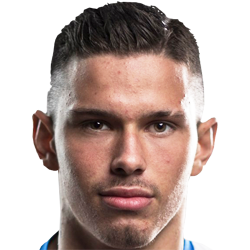 Customarily taking to the field in the Central Attacking Midfielder position, Kristoffer Velde was born in Norway. Having made his senior debut playing for FK Haugesund in the 2017 season, the skilful Midfielder has hit 7 league goals in the Eliteserien 2021 season to date in 27 appearances.

While we have made these predictions for FK Haugesund v Sandefjord for this match preview with the best of intentions, no profits are guaranteed. Always gamble responsibly, and with what you can afford to lose. We wish you the best of luck.