View all Zwickau v Viktoria Cologne tips, stats and our pre-match poll below - as well as up-to-date odds.

Zwickau will play in this match coming off the back of a 2-2 3rd Liga drawn result vs Kaiserslautern.

For Zwickau, the goalscorers were Manfred Starke (60'), Johannes Brinkies (71' Own goal) and Jozo Stanić (90'). Philipp Hercher (64') scored for Kaiserslautern.

It has not been often in recent times that Zwickau haven’t conceded. In fact, Zwickau have seen their defence breached in 5 of their previous 6 clashes, giving up 6 goals along the way.

A look at their previous results shows us that Zwickau:

In their last game, Viktoria Cologne drew 1-1 in the 3rd Liga tie with Unterhaching.

The only name on the scoresheet from Viktoria Cologne was Michael Schultz (86'). Niclas Anspach (40') was the scorer for Unterhaching.

The stats don’t lie, and Viktoria Cologne have been scored against in 5 of their last 6 games, seeing opposing sides hit 9 goals in all. Defensively, Viktoria have been far from perfect. Previous results aside, it remains to be seen whether such a trend shall be maintained here in this match.

Coming into this meeting, Viktoria Cologne haven't been defeated in their previous 3 league matches away from home.

The previous league encounter between the two was 3rd Liga match day 12 on 25/11/2020 which finished with the scoreline of Viktoria Cologne 1-1 Zwickau.

The referee was Tom Bauer.

We’re of the opinion that Viktoria Cologne would be disappointed if they were not to find the back of the net against this Zwickau lineup, although that may not prevent them from conceding a couple at the other end.

We’re predicting a very close game with a 2-1 win for Zwickau after the 90. There looks to be little in this one. 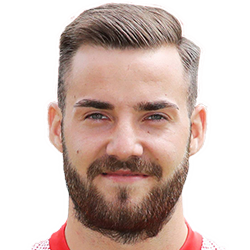 Mostly taking up the Right Attacking Midfielder position, Morris Schröter was born in Germany. After making a first senior appearance for Magdeburg in the 2013 - 2014 season, the goalscoring Midfielder has got 10 league goals in the 3. Liga 2020 - 2021 campaign so far from a total of 29 appearances.

We have made these Zwickau v Viktoria Cologne predictions for this match preview with the best intentions, but no profits are guaranteed. Please always gamble responsibly, only with money that you can afford to lose.