View all of the Levante v Getafe predictions, poll and stats below (inc. the best betting odds).

Levante will be hoping to bounce back here following a 1-0 La Liga defeat in their last game at the hands of Mallorca.

In that game, Levante managed 46% possession and 6 attempts at goal with 2 on target. For their opponents, RCD Mallorca got 9 shots on goal with 7 on target. Ángel Rodríguez (75') scored for Mallorca.

Levante have struggled with their forward play of late. Their ‘goals for’ figure stands at just 2 versus opposing sides over the course of their last 6 fixtures. In those meetings, Levante have also seen the tally of goals scored against them total 9.

Coming into this fixture, Levante are without a win at home for the past 8 league matches. Such a poor run.

Last time out, Getafe drew 1-1 in the La Liga tie with Real Sociedad.

In that game, Getafe had 38% possession and 9 attempts on goal with 2 of them on target. The only player on the scoresheet for Getafe was Sandro Ramírez (40'). At the other end, Real Sociedad got 10 shots at goal with 5 on target. Mikel Oyarzabal (68') scored for Real Sociedad.

The strike force from Getafe have struggled for goals in their past 6 games, netting the disappointing return of just 3. In those matches, Azulones have also seen the overall goal tally of opposing teams equal 11. While that may be of interest, time will tell if the trend shall continue on in this next game.

Taking a look at their past results, Getafe:

A glance at their most recent head-to-head clashes dating back to 06/10/2018 shows that Levante have won 3 of these games and Getafe 2, with the number of drawn results standing at 1.

An aggregate of 12 goals were scored between the two sides in this period, with 6 of them for Levante and 6 being from Azulones. The average goals per game has been 2.

Levante got 5 shots at goal with 1 on target. Gonzalo Melero (30') scored.

José Campaña (Muscle Injury) and Roberto Soldado (Hamstring Injury) will not be able to play for Levante manager Paco López.

Looking at these two teams, we feel that Getafe might have a difficult job to register a score against this Levante lineup who we think should be able to get on the scoresheet themselves in a winning performance.

We’re therefore predicting a very even contest with a 1-0 winning score for Levante when the full-time whistle blows. 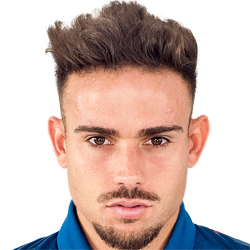 Generally deployed in the Striker position, Roger Martí was born in Valencia, Spain. Having made a first senior appearance for Levante in the 2011 - 2012 season, the gifted Forward has accumulated 2 league goals in this LaLiga 2021 - 2022 campaign so far in 8 appearances.

We have made these Levante v Getafe predictions for this match preview with the best intentions, but no profits are guaranteed. Please always gamble responsibly, only with money that you can afford to lose. Good luck if you do place a bet today.